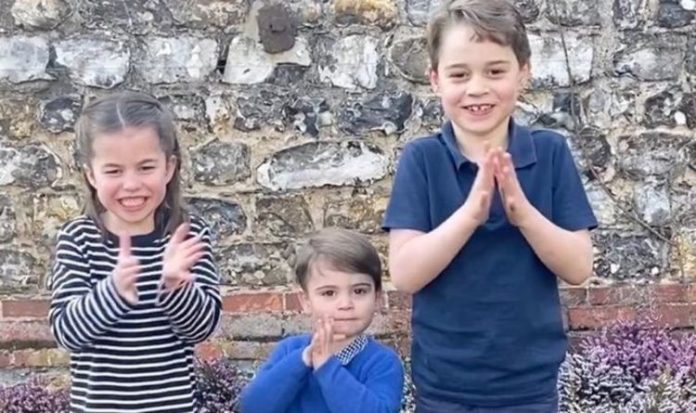 The Duke and Duchess of Cambridge may be facing a much different festive season compared to previous years, like millions of Britons across the country, but plans for the family’s traditional seasonal greeting card will still go ahead. The Cambridges have in the past released adorable portraits of their growing brood to send well wishes to the public.

Last year the family-of-five opted for a laid-back casual look.

The snap on their card showed William sitting on a vintage motorbike with little Louis propped up on his lap.

Prince George and Princess Charlotte playfully posed alongside their dad while Kate stood on the other side holding a handlebar.

The Queen placed a framed copy of the heartwarming photo on her desk when she delivered her televised annual Christmas speech.

In 2018 the family went for a country theme, with the parent sitting on a tree in a woodland surrounded by their tots.

William and Kate, well-known for their love of the great outdoors, dressed their children in woollen sweaters for the candid picture.

The couple have not yet revealed their plans to celebrate Christmas.

Under the Government’s “Christmas bubble” rules, up to three households can join together from December 23 to 27.

William and Kate opted to celebrate Christmas with the Middletons in 2016, which was significantly lower-key than the Queen’s festivities in Sandringham.

The Queen and Philip are expected to travel to Sandringham from Windsor Castle in the run up to Christmas, although a final decision has yet to be made.

The Queen likes to surround herself with close family members at Christmas and celebrate with a church service, lunch and a Boxing Day shoot.

While she has been forced to cancel a trip to church on Christmas morning, the monarch is understood to be planning on following many of her other traditions.

Palace officials are drawing up a detailed plan to ensure the monarch and the duke can celebrate in a comfortable manner.

A small team of advisers and servants would move from Windsor to the Norfolk estate with the Queen as part of her bubble.

A decision on where the Queen will spend Christmas is expected in early December.

Last year the monarch was joined at Sandringham by close relatives.

Prince Harry, Meghan and baby Archie were notably absent as they opted to spend Christmas on Vancouver Island.