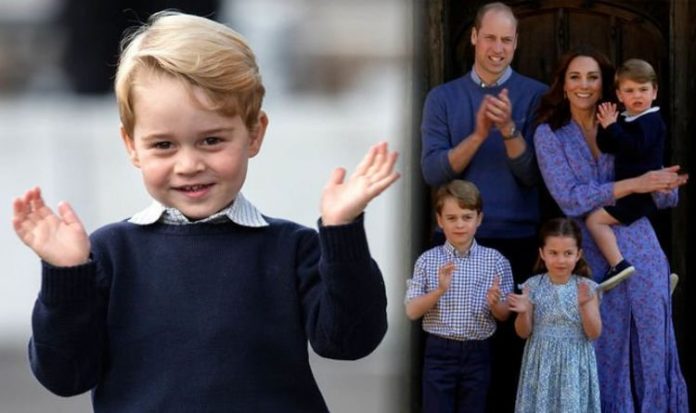 Prince George will one day be head of the Royal Family and will have the power to dictate the extent to which royal traditions are upheld. Royal traditions include the requirement that heirs to the throne travel separately to preserve the line to the throne, Royal Family marriage proposals require permission from the monarch and many more. But what royal protocol did Prince George break?

Royal fans were pleased to see new images of the entire Cambridge family over the weekend.

Prince George, Princess Charlotte and Prince Louis are said to be huge fans of the naturalist.

Sir David did not disappoint his young hosts and even gifted Prince George with the fossilised tooth of a giant shark that he excavated himself during a family holiday in Malta in the late 1960s.

Sir David visited the Palace to watch his new film with Prince William instead of attending a premier for the feature-length documentary.

Royal watchers have observed for several years, come rain or shine sons within the Royal Family have donned shorts.

Instead, only young boys are permitted to wear up to a certain age, typically eight years old according to an etiquette expert.

Prince George is currently seven years old so in keeping with this age limit, he broke royal protocol by wearing trousers 10 months before he is officially able to.

The etiquette expert said this tradition dates back to the 16th century.

Mr Hanson added: “The usual custom is that a boy graduates to trousers around eight years old.

“This is, historically, perhaps due to the practice of ‘breeching’, which dates back to the 16th century.

“A newborn boy would be dressed in a gown for their first year or two (these gowns have survived as the modern Christening robe) and then he was ‘breeched’ and wore articles of clothing that more resembled shorts or trousers than dresses.”

Eager-eyed royal fans were keen to spot another similarity between the outfits chosen for the royals.

Prince Louis wore a merino wool blue jumper from Wild and Gorgeous, the very same worn by Prince George during the Cambridge’s family tour of Canada in 2016.

In 2016, George wore the merino jumper with a pair of red shorts and a checked shirt.

Instead, the youngest Cambridge child wore the jumper with a pair of navy shorts.

The Cambridge family appear to have breached this rule several times during the coronavirus pandemic when royals were forced to adapt to new rules for royal behaviour.

Prince George has been seen in trousers several times over the course of the pandemic for instance when the Cambridge family clapped for the NHS.

In addition, he wore them during the church walk at Christmas in 2019.

But despite the weather turning much colder recently, Prince Louis was spotted in shorts in keeping with royal tradition.