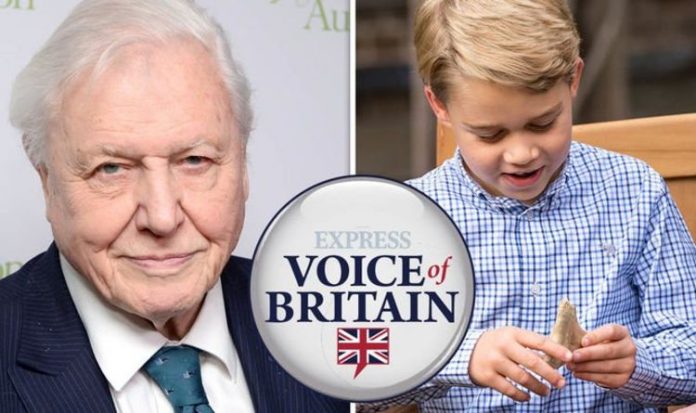 Prince George should be “left alone” and be allowed to keep the thoughtful present given him by the British naturalist, the overwhelming majority of respondents to an Express.co.uk poll have said. Out of the 4,682 people who took part in the survey, a whopping 3,756, 83 percent, replied no to the question ‘Should Prince George give back ancient tooth gifted by Attenborough?’.

Among those who voted against the return of the artefact to Malta, one respondent believes Prince George should not have been dragged in an international row.

They said: “Kensington Palace does not own the tooth, Prince George does and he may not want to part with it.

“Who on earth cares about such trivialities anyway.

“There are untold thousands of such teeth on collections, museums and still buried waiting for discovery so that are hardly unique.

“Just leave the boy alone as he should be a little older before having to deal with the media.”

Another argued this present came from Sir David and Malta can’t claim any ownership on it.

They said: “It was an item that was a personal possession of Sir Attenborough, and as such he can make a gift of it to whom he pleases.”

Similarly, another respondent said: “It was gifted to him by Sir David Attenborough…

“Why SHOULD he give it back? George has an interest in fossils and he isn’t going to throw it to the bottom of his toy box…

“His parents will obviously make sure it’s well taken care of.

“My son would have jumped up and down with excitement at this opportunity.”

As previously revealed by Kate, Duchess of Cambridge, Prince George is particularly interested in natural history and dinosaurs.

Another voter added: “Since the shark obviously wasn’t Maltese and I don’t suppose it cares much anyway as it no longer has any use for teeth, he should keep it.”

The row started on Monday when Malta’s Culture Minister said he wanted to retrieve the 23-million-year-old tooth Sir David had found on one of the country’s beaches in the late 1960s, decades before he decided to give it to George last week.

The minister told the Times of Malta: “There are some artefacts that are important to Maltese natural heritage and which ended up abroad and deserve to be retrieved.”

However, his ministry has since backtracked following a backlash in Malta and abroad.

On Wednesday, a spokesman for the ministry said: “The minister would like to note that with reference to this case, it is not the intention to pursue this matter any further.”

But the initial demand by Mr Herrera fuelled the ongoing debate on the issue of returning artefacts to countries of origin or where they were first been found.

Some social media users believe this artefact “belongs on Malta, not in the drawer of a seven-year-old kid”.

Another named Maria said: “This fossil should be in a Natural History Museum and not in the Prince George toy room”.

She wrote: “This is not satire. We have lost the plot.

“Rather than fight to get back the millions it allowed to be stolen in corruption, this Malta Government’s priority is now to engage in a battle with a little boy for a shark’s tooth given to him by the world’s leading natural historian”.