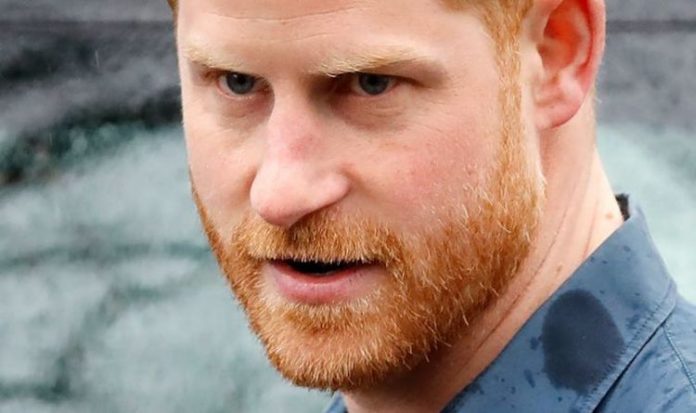 Prince Harry and Meghan Markle confirmed their decision to step away from their roles of working royals is now irreversible after a one-year trial away from the Royal Family. Buckingham Palace confirmed the Queen had been informed and the Duke and Duchess of Sussex will be stripped of all their appointments and patronages. Royal expert Charlie Lankston suggested the Duke will be particularly “hurt” by losing the honorary military titles he accrued after years of service for Queen and country.

Speaking to Access, Ms Lankston said: “Behind the scenes and in official purposes, it does have an impact on the two of them.

“They will both be removed from the remaining royal offices and titles that they held. They will lose all of their patronages, Meghan was a patron of the National Theatre in the UK. Harry had a number of patronages, including with the rugby and football clubs and things like that.

“He will also be stripped of his honorary military titles.”

Among the roles the Duke of Susses is set to lose now the decision has been confirmed are the positions of Captain-General of the Royal Marines, Honorary Air Commandant of RAF Honington and Commodore-in-Chief, Small Ships and Diving, Royal Naval Command.

The royal commentator continued: “We know that Harry has a great love of the military, we know he was devastated when he had to step away from active duty many years ago.

“And that, I think, is going to be what really hurts him the most. Having to give up the titles he worked so hard to get in the first place.

“They will still be the Duke and Duchess of Sussex, they will still be able to use His and Her Royal Highness however it is understood they will not use those titles in day to day life whenever they are doing any kind of professional job.”

Prince Harry served for more than 10 years in the British Army and the royal often paid tribute to the experience and the network he built during his two deployments.

READ MORE: Meghan and Harry warned ‘no way back for them’ – ‘deep wounds’ remain

Dominic Reid, the CEO of the Invictus Games foundation, said in a statement: “We are proud to have The Duke of Sussex as our patron.

His military service and experience, combined with his genuine compassion and understanding for those who serve their countries has raised awareness of wounded, injured and sick service personnel and the role they continue to play in society.

“His work has had an extraordinary impact on the way in which disability, service, and mental health is viewed around the world. And he has been instrumental in changing the lives of many.”