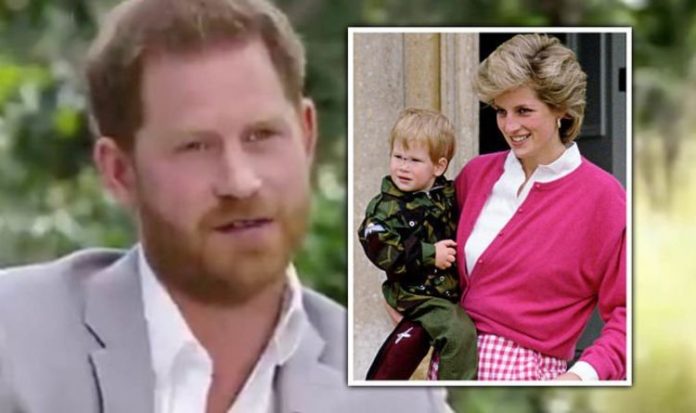 Prince Harry said his “biggest fear” is Meghan facing the same treatment as his mother Princess Diana. In a 30-second teaser released by US broadcaster CBS, Prince Harry appeared to suggest the Sussexes and his late mother have endured similar pressure and experiences.

He told Oprah: “I’m just really relieved and happy to be sitting here, talking to you, with my wife by my side, because I can’t begin to imagine what it must have been like for her, going through this process by herself, all those years ago.

Harry may be referring to Princess Diana’s exit from the Royal Family in 1996, when she officially divorced from Prince Charles and lost her Her Royal Highness style.

He added: “My biggest fear was history repeating itself.”

The Duke and Duchess of Sussex officially stepped down as senior royals in late March last year, a few days after they flew from British Columbia to California to begin their post-royal lives.

This implies they can no longer carry our royal duties, represent the Queen or use their HRH styles – albeit they haven’t been stripped of them.

And on February 19 Buckingham Palace announced the Queen’s decision to ask Meghan and Harry to relinquish all their royal and military patronages following their decision not to return into the royal fold at the end of the 12-month Megxit review period.

Following Megxit, the Duke and Duchess of Sussex were allowed to pursue financially profitable ventures, live abroad and retain their private patronages, such as Mayhew and the Invictus Games Foundation.

Last month it was revealed Meghan and Harry were taking part in their first sit-down interview since Megxit.

This already recorded chat with Oprah will be broadcasted in the US on March 7 at 8pm ET (March 8 at 1am GMT).

According to CBS, the interview is touching upon a wide range of topics – including motherhood, Meghan’s arrival in the US, her life under the public eye and the Sussexes’ hopes for the future.

While the Primetime Special was first said to be approximately 90 minutes long, it has now been reported to last for two hours.

During this rare interview, Meghan first chatted alone with Oprah to later be joined by her husband.

Prince Harry has already spoken in public about Megxit, the reasons behind it and his plans for the future in an episode of The Late Late Show with James Corden released on Friday.

During the 17-minute light-hearted show, the Duke of Sussex said life in the UK and the public scrutiny his family was under was “destroying my mental health”.

He also denied he and Meghan had “walked away” from the Royal Family, preferring to describe their departure as “stepping back”.

He said: “As far as I am concerned, whatever decisions are made on that side, I will never walk away, I will always be contributing.

Speaking again about public service and how important it is for him, the Duke added, after being asked what he expects life to be after the lockdown and what he is excited for after Megxit: “I have no idea, a slightly different version but a continuation of what we were doing back in the UK anyway.