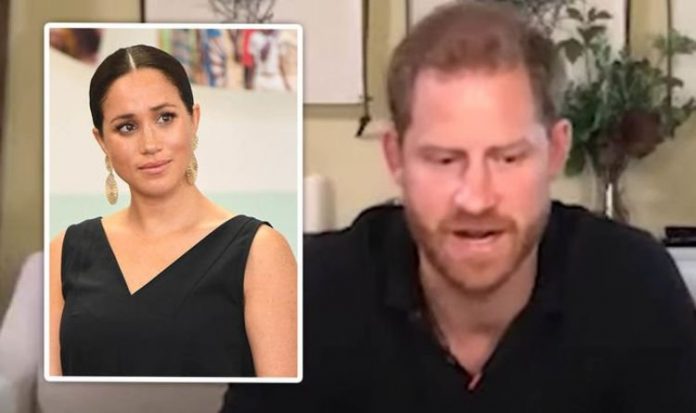 Prince Harry confessed he has lived most of his life unaware of unconscious bias as he spoke to activist Patrick Hutchinson. The Duke of Sussex spoke about his “upbringing and education” and how it didn’t help him to realise many people in the UK hold social stereotypes.

He said: “And unconscious bias, from my understanding, having the upbringing and the education that I had, I had no idea what it was.

“I had no idea it existed. And then, sad as it is to say, it took me many, many years to realise it, especially then living a day or a week in my wife’s shoes.”

Unconscious biases occur when people instinctively favour others who look like them or share the same values and, in turn, retain social stereotypes about groups of people different from them.

Speaking about the need to hold a discussion at a national level on racism and bias in the country, Prince Harry added he doesn’t judge people for holding unconscious bias as they are unaware of it.

Prince Harry took part in the chat from his home in California (Image: GQ)

He said: “And no one’s blaming anybody. That’s the way that I look at it. No one’s pointing the fingers.

“You can’t really point fingers, especially when it comes to unconscious bias.

“But once you realise or you feel a little bit uncomfortable, then the onus is on you to go out and educate yourself, because ignorance is no longer an excuse.”

Prince Harry took part in a 40 minute-long conversation – recorded for the GQ Heroes conference – with activist Mr Hutchinson, who became famous across the country in June, in the wake of a Black Lives Matter protest in London.

The 50-year-old was hailed a hero after he rescued Bryn Male from a heated clash in London, despite Mr Male siding with an anti-BLM march.

Mr Hutchinson was pictured carrying Mr Male away from the clash, saving him from the risk of being trampled on.

This picture was seen by millions around the world, giving the activist a platform he used for good.

Prince Harry praised Patrick Hutchinson for the heroism he showed at a BLM march in June (Image: GQ)

The personal trainer has helped found the United To Change and Inspire (UTCAI) group, aiming to bring people together and overcome injustice and prejudice.

Speaking about his organisation, Mr Hutchinson said: “Now we have this platform, we want to do some good with it, you know?

“So we’ve created this initiative called UTCAI – United To Change and Inspire – and with this, we’re going to try to champion equality.

“And we have various pillars that we are all going to be working in.

Prince Harry and Meghan Markle have stepped down as senior royals (Image: EXPRESS)

“Because, like I said, this is a class issue too, as well as a race one.”

This is not the first time Prince Harry has spoken about the role Meghan has had in opening his eyes on racism in the UK.

Earlier this month, the couple marked the beginning of Black History Month in the UK by sharing their personal list of NextGen Trailblazers.

Upon unveiling it, Prince Harry spoke about his own “awakening”.

Meeting Meghan, who also took part in the Zoom call, was pivotal to Harry’s understanding of the issues encountered by people of colour, the Duke confessed.

He continued: “You know, when you go in to a shop with your children and you only see white dolls, do you even think: ‘That’s weird, there is not a black doll there?’

“And I use that as just one example of where we as white people don’t always have the awareness of what it must be like for someone else of a different coloured skin, of a black skin, to be in the same situation as we are where the world that we know has been created by white people for white people.”