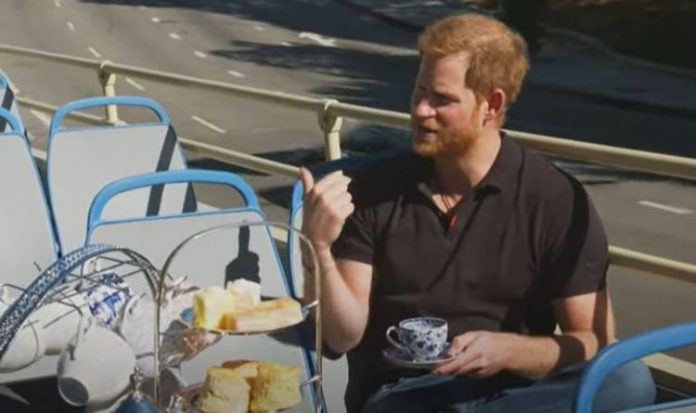 Prince Harry’s latest TV appearance alongside comedian pal James Corden has provoked dismay from one royal commentator who branded the interview “an embarrassing load of piffle.” The Duke, 36, answered questions as he and Mr Corden road around Los Angeles on top of a doubledecker bus for an episode of The Late Late Show with James Corden.

During the lighthearted skit the old friends exchanged jokes and Harry opened up about home life with his wife Meghan Markle, 39, and son Archie Harrison, one.

The Sussexes are currently expecting their second child and the interview aired just one week after they confirmed they would not return to their roles as senior royals.

As well as revealing that Archie’s first word was “crocodile” and that the Queen bought him a waffle-maker for Christmas, Harry also shed new light on his and Meghan’s decision to ditch the monarchy.

Some royal fans were delighted to hear new details about Harry’s life Stateside, with many of them praising his appearance on Twitter.

READ MORE: Prince Harry vs the Queen: ‘Gaping gulf’ between UK and US royals

One gushed: “Oh, that was awesome. So much fun. Loved that Harry and Meghan walked away from toxicity to live their best lives. True inspirations to all of us!!!!”

Another put: “That was full of fun and laughter.”

While a third reacted: “I loved it. He was funny, charming, and it was great to see him full of life and happy.

“I especially loved the story of the Queen and the waffle maker. He loves his grandmother and she loves him, Meghan, and Archie back.”

But the interview sat less well with one royal commentator who branded it an “ill-judged attempt at royal humour.”

While Mr Fitzwilliams recognised the humour of the clip may appeal to some, he claimed it was “demeaning.”

The expert said: “I realise that there are those who will be on the edge of their seat when Harry takes a bathroom break in the house used for the Fresh Prince of Bel Air.

“Perhaps, as James Corden, suggested, he might make an offer for it so he could become ‘the Prince who is living in the house of the fresh prince’.”

“I am sure this joke will resonate worldwide especially since Meghan appeared on FaceTime to give her views. I mean, she could be ‘the fresh princess of Bel Air’. How demeaning it all is!”

Despite the personal insights provided by Harry, Mr Fitzwilliams branded the interview a “pathetically inadequate and silly appearance.”

He said: “We learnt that Archie’s first word was ‘crocodile’ and that the Queen sent him a waffle maker for Christmas. It seemed to me that Harry has taken to using it himself.

“Waffle is a generous way to describe what he says in this pathetically inadequate and silly appearance.”

The expert went on to claim Harry’s insights into “toxic” royal life as “almost unbelievable.”

Mr Fitzwilliams said: “Almost unbelievably he adds a few comments about how toxic royal life was, most especially because of the press, how it affected his mental health and how he and his family had to escape from it.

“He has, as we all know, done important work to help others who suffer from mental health issues, as well as begun brilliant charitable endeavours such as the Invictus Games.

“Yet he chooses this ridiculous chat show to tell us that his ‘life is public service’, which refers to the statement the Palace put out when it was announced Harry and Meghan were stepping down as working royals.”

Last Friday, the Sussexes responded to a Buckingham Palace statement about them stepping down for good with a comment of their own.

A Sussex spokesman said: “As evidenced by their work over the past year, the Duke and Duchess of Sussex remain committed to their duty and service to the UK and around the world, and have offered their continued support to the organisations they have represented regardless of official role.”

Mr Fitzwilliams dubbed the response “angry and impertinent” and claimed the couple seemed to be “confused” about the meaning of public service.

The expert said: “The Sussexes angry and impertinent rebuttal was confused, as having philanthropic aims is not the same as being a working member of the Royal Family which cannot be half in, half out as they wanted.”

Mr Fitzwilliams said Mr Corden had done well to get Harry and Meghan on his show but claimed wouldn’t carry as much weight in Britain as would in the US.

He said: “James Corden is one of Hollywood’s top stars. He is, highly controversially, as many found his performance as a gay character offensively stereotypical, nominated for a Golden Globe for his performance in The Prom.

“All credit to him for getting Harry on his show, it’s his job after all and the audience loved it.”

The commentator added: “It is just as well that with the Queen’s timely and highly significant intervention urging people in Britain to be vaccinated, this rubbish has so far had little exposure here.”

Mr Fitzwilliams warned Harry’s participation in the programme showed he was at risk of “becoming a joke.”

The expert added: “What it shows is that Harry is in danger of becoming a joke if he appears in this sort of gruesome farce. It’s unbelievable!”