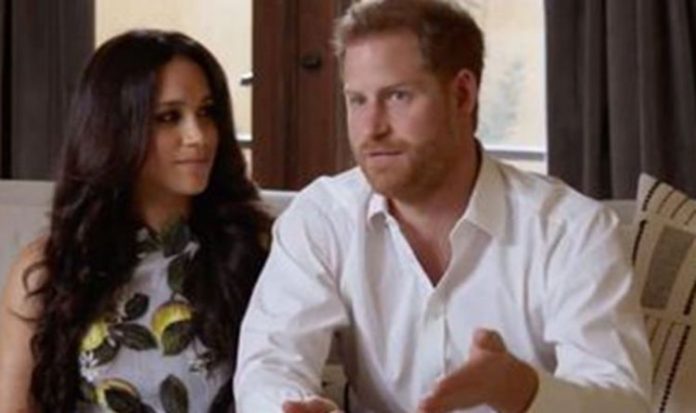 Prince Harry could speak out against his own brother Prince William in the upcoming Oprah interview, according to well-renowned royal expert Richard Fitzwilliams. The royal commentator told Us Weekly’s Royally Us that Harry and Meghan will be “pretty icy about the Cambridges on Oprah”. He pointed to the book Finding Freedom as a blueprint to the highly-anticipated interview, claiming that “the Queen comes out very well in the book, the Prince of Wales comes out extremely well but the Cambridges don’t”.

The 90-minute sit-down interview with Oprah will be released in a week’s time, amid suggestions that Prince William is “in the dark” over its content.

Mr Fitzwilliams said that Prince Harry could “get angry” during the interview and even criticise his own brother and the future king.

The royal commentator said: “There is no doubt that relations between the brothers are very, very distant.

“Harry brought these rumours out into the open during the ITV interview with Tom Bradby in Africa.”

Mr Fitzwilliams said that Meghan’s “inner circle” consulted Harry and Meghan during the writing of Finding Freedom and could be an insight into the Oprah interview.

He said: “Finding Freedom may be a guide to what happens in the Oprah interview.

“In Finding Freedom, the Queen comes out very well, the Prince of Wales comes out extremely well, but the Cambridges don’t.

“It goes into how William had doubts about Meghan, and that Kate wasn’t as welcoming as she could have been.

“There is a very good chance, if Finding Freedom is anything to go by, that they will be pretty icy about the Cambridges on Oprah.”

He continued: “That sort of statement about service is very unhelpful but what it shows is how angry they are.

“The question is how angry will they be on Oprah Winfrey? And if so, what will they criticise?”

In an interview released earlier this week, the Duke of Sussex told James Corden that he had to step back from royal duties to protect himself and his family from the “toxic” situation created by the UK press.

Prince Harry told TV chat show host James Corden it was “destroying my mental health” and he “did what any husband or father would do”.