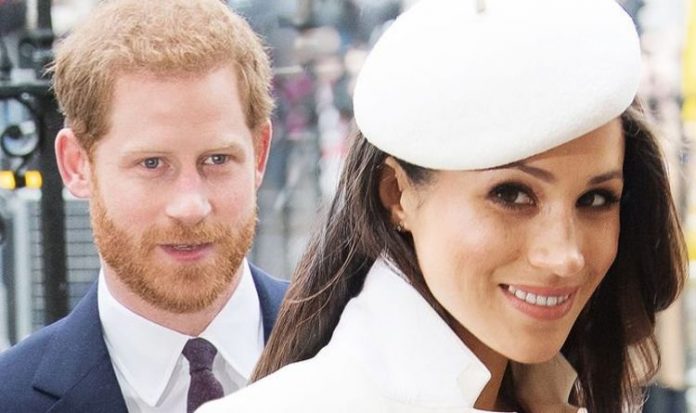 Prince Harry, 36, and Meghan Markle, 39, have come under fire after commentator Andrew Pierce claimed the royal couple are “exploiting their royal connections”. The Duke and Duchess of Sussex this week announced the launch of their new podcast on Spotify. A trailer clip of Archewell Audio is available on the streaming service, accompanied by a short description which reads: “Prince Harry, the Duke of Sussex and Meghan, the Duchess of Sussex, present Archewell Audio.”

“They are exploiting their royal connections!

“I’m just fascinated by their first movie, the Hollywood video.

“Do you think it’s based in Butlins or a camping holiday in Skegness? Of course, it won’t be.

READ MORE: ‘Take them away!’ Meghan faces fresh calls to have title stripped

“It will be with their posh, rich friends.

“This is the couple who said they were moving to the US, standing back from royal duties because they wanted privacy and a ‘normal life’.”

His comments come as a royal author has warned the couple are likely to face “bear traps everywhere” as they continue to pursue their own commercial activity.

Penny Junor said Harry and Meghan’s appeal stems not from them as individuals, but because they are royal.

But she added they no longer benefit from “gold standard” advisers at Buckingham Palace, who would have checked their plans for pitfalls.

The couple has set up a new production company, Archewell Audio, and signed a multi-year deal with audio streaming service Spotify to host and produce podcasts.

Ms Junor said the couple’s other multimillion-pound deal with Netflix had already proved controversial because the company produced The Crown, with season four exploring the troubled life of Harry’s late mother Diana, Princess of Wales.

The royal expert said: “I think, unhappily, it is very difficult to square up being a member of the Royal Family with commercial activity because there are bear traps everywhere.

“I’m sure it never crossed Harry and Meghan’s minds about The Crown possibly being negative or damaging when they got their wonderful contract from Netflix.

The Queen’s grandson Harry and former Suits actress Meghan quit as senior working royals in March for more freedom and to earn their own money.

They still remain members of the Royal Family, and retain their HRH styles, although they do not use them.