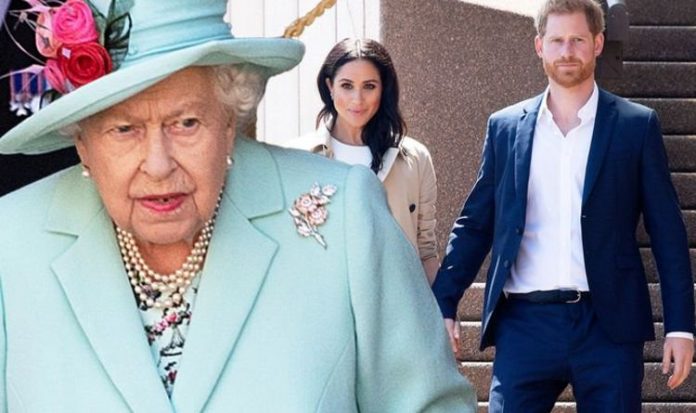 Royal writer Robert Lacey told Sky News that the Queen would have come to the same conclusion as Meghan Markle and Prince Harry during their scheduled review in March. However, the Duke and Duchess of Sussex spoke to Queen Elizabeth II before the review to inform the monarch they would not be returning to work for the Royal Family.

Mr Lacey said: “We had this date previous to today where the Queen was going to review what the position of the Sussexes would be.

“If you are looking at a half-hearted explanation of what has happened today, they jumped before they were pushed.

“They have said that they are going to go their own way now but it is very obvious.

“The Queen’s statement from Buckingham Palace says she has spoken with Harry, he has told her what they would like to do and she now agrees with that.”

Ms Levin added that it showed Queen Elizabeth II that the couple “don’t care” about the monarchy.

She told BBC News that the Duke and Duchess of Sussex’s Instagram post announcing that they were stepping down as senior members of the Royal Family was rude.

Ms Levin said: “I think the non-stop waves of what they are doing now and what they are going to be doing, just makes you feel Sussex exhaustion.

“Prince Harry does know that and they could have done it very easily.”

The royal commentator stated that Meghan and Harry should have waited a few weeks after informing the monarchy before making the departure public.

She added: “I felt the way they quickly left with a message on Instagram was very rude.

“I think they could have blessed it with the Royal Family and come out a few weeks later with an agreement between them all.”