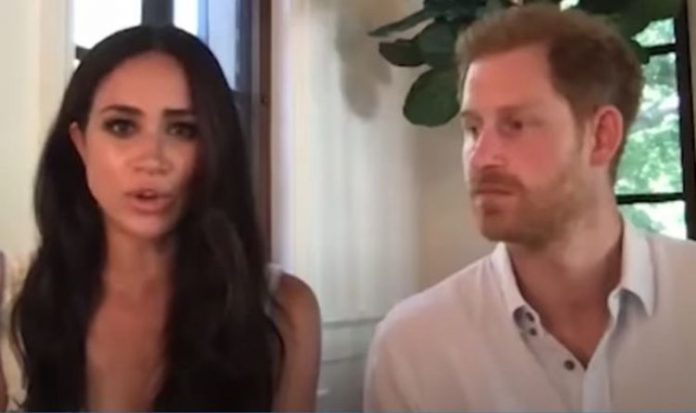 Prince Harry and Meghan Markle’s new podcast has already divided commentators before the release of the first episode later this month. Jeremy Vine on 5’s guests Salma El-Wardany and Nana Akua clashed over the Duke and Duchess of Sussex’s announcement that they have signed a multi-year deal with Spotify. Ms El-Wardany tried to defend the royal couple as her fellow panellist slammed them for being “unrelatable”.

Ms Akua told the show: “A lot of people have already criticised them, saying ‘well, I thought you wanted to be out of the spotlight’.

“We don’t know how much money they’re going to be getting for this but somebody who did something similar got something like $75million.

“People have commented on their little trailer and have said it’s just unrelatable, and I think they are.”

She added: “I think they’ve lost the plot, and now are trying to find someplace that they belong, even though they said they wanted to be out of the spotlight.

“It makes no sense at all, and I don’t think I’ll be listening to it at all, maybe just for a laugh.”

Ms El-Wardany did not agree, going on to explain why the podcast was something that was actually “desperately needed”.

“To Nana’s point about them wanting to get out of the spotlight, I think what they wanted to do was get out of the very destructive tabloids of the British press, and I can totally understand why.

“I’m really looking forward to it. I think it’s members of the Royal Family finally using their position and influence to do something good and have conversations that this country desperately needs to have.”

“It’s not just me, if you read some of the comments people are saying about it, everyone else is saying the same thing.

In their statement announcing their departure in March, the Duke and Duchess had expressed a desire to step back as “senior royals” but with a plan to continue their association with the Royal Family in some minor role.

They wrote: “After many months of reflection and internal discussions, we have chosen to make a transition this year in starting to carve out a progressive new role within this institution.

“We intend to step back as ‘senior’ members of the Royal Family and work to become financially independent while continuing to fully support Her Majesty The Queen.

“It is with your encouragement, particularly over the last few years, that we feel prepared to make this adjustment.”