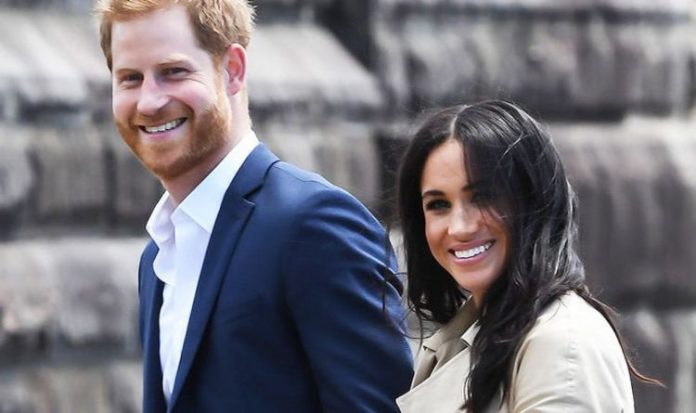 Prince Harry, 36, and Meghan Markle, 39, will not return to their roles as working members of the Royal Family. The Sussexes have officially cut ties with the monarchy one year on from their royal exit last year and on Friday the palace confirmed they must return a number of royal honours and patronages to Queen Elizabeth II, 94.

While Prince Harry has had to relinquish his treasured ceremonial military titles including the post of Captain-General of the Royal Marines, neither he nor Meghan will have to give up their HRH (His/Her Royal Highness) styles nor their Duke and Duchess of Sussex titles.

According to Palace insiders, it would have been deemed “unduly punitive” to strip the couple of their HRH styles and titles given an understanding was reached between them and the Queen last year.

The Megxit deal the Sussexes struck with the Queen allowed them to keep their styles and titles as long as they did not use them in conjunction with their work going forward.

Prince Harry is the son of future king Prince Charles, 72, and was born with an HRH style that he is expected to keep for life.

According to Mr MacMarthanne, stripping the Sussexes of their peerage and HRH styles would be a “draconian” move.

He said: “Even if the peerage were to be removed there remains the matter of the style and title HRH and prince.

“By the precedent established at the time of Edward VIII’s abdication, it could be expected that if the Sussex peerage were disclaimed or forfeited then the duke would revert to being HRH Prince Henry (Harry) of Wales, becoming HRH The Prince Henry upon the succession of his father.

“That all said, the style and title HRH and prince or princess is within the gift of the monarch.

“It is, therefore, conceivable for these to be removed, as was the case when George V stripped several persons of such styles and titles in 1917, persons who were deemed enemies of the state.

“Again this is draconian, and it should be remembered that the duke and duchess voluntarily gave up the use of their HRH styles last year.”