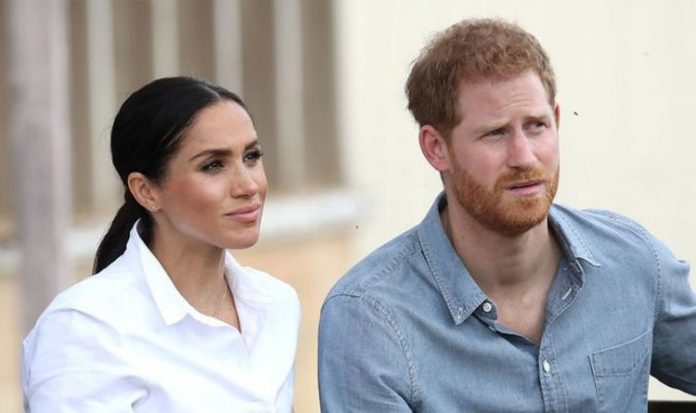 Last Friday Buckingham Palace announced Meghan and Harry had lost their royal positions after the couple confirmed they do not intend to return as working royals. In response, the Duke and Duchess ruffled feathers by releasing a statement saying “we can all live a life of service, service is universal”.

Despite this, speaking to People.com, one royal insider said: “There is a very strong family bond.”

A source close to Meghan and Harry said the couple had been “disappointed” at the move but “respect the decision that was reached”.

The loss of royal patronages, and Harry’s remaining military roles, was revealed in a statement from Buckingham Palace.

It said: “The Duke and Duchess of Sussex have confirmed to Her Majesty The Queen that they will not be returning as working members of The Royal Family.

“There is a very strong family bond” (Image: GETTY)

The Queen has stripped Meghan and Harry of their royal patronages (Image: GETTY)

Meghan has lost her role as patron of the National Theatre and Association of Commonwealth Universities.

Harry and Meghan pictured with their son Archie in 2019 (Image: GETTY)

The Prince also lost his positions as Captain-General of the Royal Marines, Honorary Air Commandant of RAF Honington and Commodore-in-Chief, Small Ships and Diving, Naval Command.

However, both royals will retain patronages they arranged privately or for charities they helped to found.

As a result, Meghan will continue her work with Smart Works and Mayhew, an animal rescue charity.

Harry and Meghan stepped down as senior royals in March 2020 (Image: GETTY)

Harry, who served in the British Army for ten years, will retain his involvement with the Invictus Games.

The Prince launched the sports event in 2014 to help support injured services personnel.

It will be up to The Queen to redistribute Harry and Meghan’s previous roles to other Royal Family members.

Speaking to The Times a military insider said Anne, the Princess Royal, is being lined up to become the next Royal Marines Captain General.

This would make her the first woman to have ever held the position.

The source explained Anne is the “least controversial choice” for the role following Harry’s departure.

He added: “She’s not going to cause any problems or scandals. It wouldn’t be fair to take it off one brother and give it to the other.”

Prince Harry will continue his involvement with the Invictus Games (Image: GETTY)

Harry and Meghan stepped down as senior Royal Family members in March 2020 and moved to North America.

The couple are currently living in Santa Barbara, north of Los Angeles.

Last year they signed a major deal with Netflix to produce films, documentaries and children’s shows for the streaming giant.