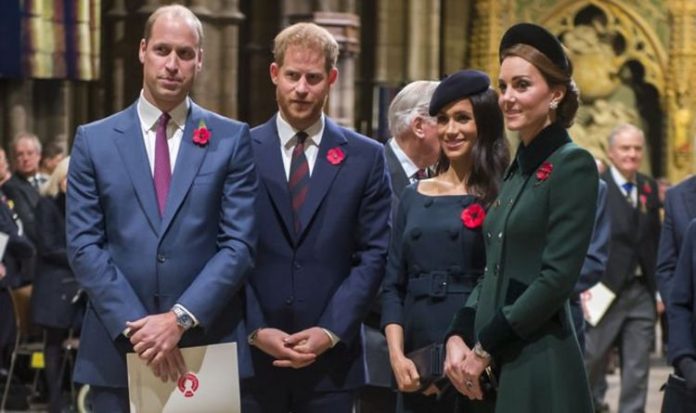 The relationship between the two brothers seemed to reach its breaking point when William cautioned his younger brother about marrying too quickly. It escalated when Harry and Meghan Markle left the Firm and moved to Los Angeles.

But despite months of little communication between then two brothers, it appears they have put it behind them and agreed to a truce.

Meghan and Harry have also sent William and Kate, Duchess of Cambridge, and their family gifts following a shopping trip in California.

It is also believed the Duke and Duchess of Cambridge posted gifts to Meghan and Harry and their son, Archie.

This comes amid reports relations between Harry and William are improving.

Royal expert, Katie Nicholl told True Royalty TV’s The Royal Beat: “I think it’s no secret that there were great tensions and great difficulties in the relationship.

“There was an unbreakable bond between them and they were so close.

“I don’t think they will ever be close the way that they were, but there have been nine months now since Megxit.

“I think relations are better between them.

Mr Morton told : “Harry has sent presents to William and Kate and the calligraphy has been done by Meghan.

“He plans to speak to his father and brother over Christmas.”

These comments come after author Omid Scobie claimed Kate could have supported Meghan more when she married into the Firm.

But Marlene Koenig said it should have been Meghan who made the first move as the newcomer.

The royal expert previously told Express.co.uk: “William has taken a different attitude and I think at some point they’re going to have to do something.

“I think there’s far more to this story that we don’t know on both sides.

“One of the things I said in my review is how Meghan kept saying Kate didn’t contact her.

“My view is if you’re the newbie, in a new job, you go to somebody and say, ‘hi, can we talk? I’d like to know more about what I’m marrying into’.