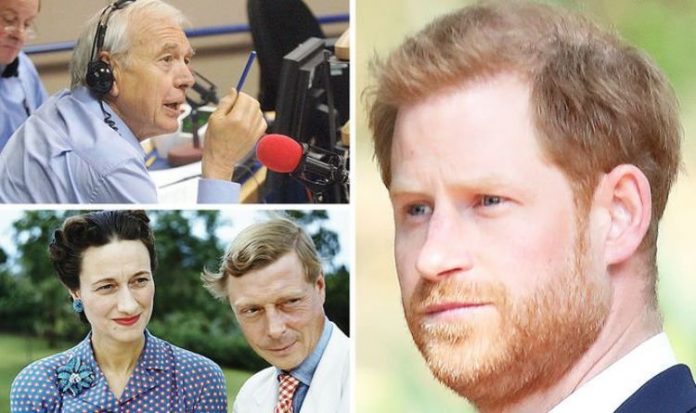 The Royal Family has been a regular target of criticism from Mastermind host Mr Humphrys, who is a self-professed “ardent republican”. The veteran journalist, 77, had numerous clashes with the royals, including with Harry, the Queen and Prince Philip. In one outburst, Mr Humphrys blasted Harry’s takeover of BBC Radio 4’s Today programme as a “PR exercise” and refused to appear alongside him.

Recently, Mr Humphrys has been vocal about “Megxit” – one-year-on from Harry and Meghan Markle’s decision to leave senior roles within the Royal Family.

During a heated rant on Good Morning Britain, the former BBC star claimed the couple had been “reaching” and ”spouting… garbage” at the public.

He felt the Sussexes had acted in a “sanctimonious” way by allegedly claiming “the world will be a better place” if everyone acted like them.

The ITV show’s host Piers Morgan, a long term critic of the couple, blasted them for preaching about climate change while using a “private jet” from Sir Elton John.

Prince Harry and Meghan Markle cited ‘privacy’ issues as a reason for moving to the US (Image: GETTY)

Previously, Mr Humphrys argued that Harry’s cessation of royal duties could spark a debate about the future of the Royal Family.

He suggested that there needed to be “quality control” within The Firm and that there could be a reduction in the amount of working royals.

Mr Humphrys asked: “Do we actually need this service or can we do with less or even none at all?”

He admitted that the “monarchy as an institution” was “not currently in question” but felt the Royal Family was.

JUST IN: Prince Philip unmasked as ‘quite shy’ in confession from Joanna Lumley

John Humphrys blasted Prince Harry in the past for using his BBC Radio 4 takeover as a ‘PR exercise’ (Image: GETTY)

The TV star believed the public could ask “What is the point?” of them if “there is no hand-shaking”.

Mr Humphrys referred to the Royal Family’s duty to be ambassadors for the UK by meeting overseas leaders, public figures and the public.

He questioned whether their meetings had influence on other countries and if it still positively impacted the UK in a modern world.

In a direct swipe at Harry, Mr Humphrys felt that his decision to leave royal duties showed there was less of a need for the Royal Family’s “services”.

Prince Harry and Meghan Markle got married in 2018 – here is their royal romance timeline (Image: EXPRESS)

He said: “There are some members who announce they don’t want to be bothered doing it any more.”

Mr Humphrys then claimed that Harry had decided to “slope off to a life easier on the hands”.

He referred to the Duke of Sussex’s decision to move to the US, where he and Meghan have fought to become financially independent.

This has led them to negotiate a deal with Netflix, reportedly worth $112million (£81million).

John Humphrys described himself as an ‘ardent Republican’ and had multiple clashed with the royals (Image: GETTY)

The royal couple have also agreed to make a podcast series for Spotify, which was said to be worth $40million (£29million).

Harry and Meghan are also expected to make up to $1million (£710,000) for each public speaking event, according to a Telegraph report last year.

Mr Humphrys took a swipe at Meghan for “maybe” being “misinformed” about her role in the Royal Family after getting married in 2018.

He said that she must have “fancied a bit of hand-shaking too” at first and stated: “Why else would she join [the Royal Family], since that’s what they ‘do’?”

Mr Humphrys added: “It would now appear that she thought she could become a Duchess and an HRH without having to put on the white gloves.”

The star then countered his argument by stating that instead of Meghan “marrying into the Royal Family” it could be the other way around.

He suggested Harry could have “married into the family of Hollywood celebrity” and sniped: “There’s not so much hand-shaking required over there.

“You can join the family and spend more time lounging by the pool.”

He compared Harry to his “great-great uncle, Edward VIII” who he said “enjoyed 30 years of a similar post-hand-shaking idyll in Paris”.

Mr Humphrys referred to the royal abdicating from the throne in 1936 in order to marry US socialite Wallis Simpson.

Mrs Simpson had married twice and wasn’t divorced during her courtship with Edward, which was something that the Church of England did not approve of.

It threatened a constitutional crisis in the UK, due to the monarch being head of the Church of England.

It led Edward to abdicate and six months later he married Mrs Simpson in 1937 – they lived in Paris for most of their lives.

Edward died in 1972, one-year after being diagnosed with throat cancer, and Mrs Simpson passed 14 years later from dementia.