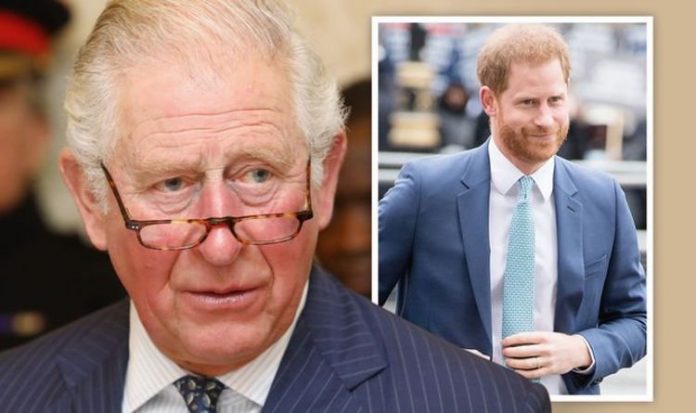 Prince Harry and Meghan Markle have relinquished their roles as full-time working royals to gain financial independence, the freedom to live abroad and more control over their privacy. However, despite their exit – dubbed ‘Megxit’ by royal watchers – their ties to the Royal Family are unbreakable, with the Duke of Sussex being linked by blood and tradition to the House of Windsor.

And, according to royal commentator Victoria Murphy, Prince Harry is destined to get even closer to the Crown with time.

The expert wrote in Town & Country magazine: “The reality is that, no matter how many ties they cut financially or otherwise, Harry and Meghan’s story continues to be talked about through the lens of the Royal Family.

“There is no suggestion that they want this not to be the case. They will, as the Queen said, ‘always be much loved members of my family.’

“This baby will be the Queen’s great-grandchild, the future king’s grandchild and, initially, eighth in line to the throne.

Prince Harry news: Prince Harry is set to become closer to the Crown when Charles is crowned King (Image: GETTY)

“The family will likely appear publicly alongside the royals at events such as Trooping the Colour in the future.

“Harry is set to become even closer to the Crown when he goes from being the grandson to the son of a monarch.”

The Duke of Sussex is currently sixth in line to the throne, followed by Archie and, soon, by his second child, who will push down a position Prince Charles’s younger siblings and their children.

Being the youngest son of the Prince of Wales, the Duke is set to become, after the end of the Queen’s reign, the son of the King.

And, when Charles’s reign comes to an end, Harry will be known as the brother of King William.

While his and Meghan’s ties to the Crown are undeniable, by stepping down as working royal and becoming independent from the Sovereign Grant, the Sussexes are now free from royal customs and requirements and can release personal news and information such as the Duchess’ pregnancy in their own terms, Ms Murphy said.

She said: “The Sussexes can now have control over what they spend their time on and, crucially, who has access to them.

“They are no longer part of the system in place for British media to cover the Royal Family, and there will be no debating whether baby Sussex number two will be shown to the world in a mass media photo call.”

Following Archie’s birth, Meghan and Harry broke with the tradition started by Princess Diana and, rather than stepping out of the hospital to show their newborn to the world, decided to stage a photo call only with a few members of the press two days after they left Portland Hospital.

Harry and Meghan have protected their son from public scrutiny as much as possible, not revealing his godparents and releasing only a few pictures of him over the past two years.

Prince Harry news: The line of succession to the throne (Image: EXPRESS)

As non-working royals, they will not be expected to share any news of their second child in accordance with royal tradition.

Meghan and Harry announced they were expecting a second child on Valentine’s Day.

Their spokesperson said in a brief statement: “We can confirm that Archie is going to be a big brother.

Prince Harry news: Meghan and Harry released this picture to announce they are expecting a second child (Image: MISAN HARRIMAN)

Prince Harry and Meghan also shared a picture taken remotely by a long-time friend of the Duchess, photographer Misan Harriman.

In the snap, the couple lays on the grass under a tree as they smile at each other.

Meghan’s baby bump can be clearly seen under a bespoke Carolina Herrera dress she had commissioned during her first pregnancy.

The Duke and Duchess of Sussex did not share when the baby is due, but a few royal commentators believe it could arrive in early summer.