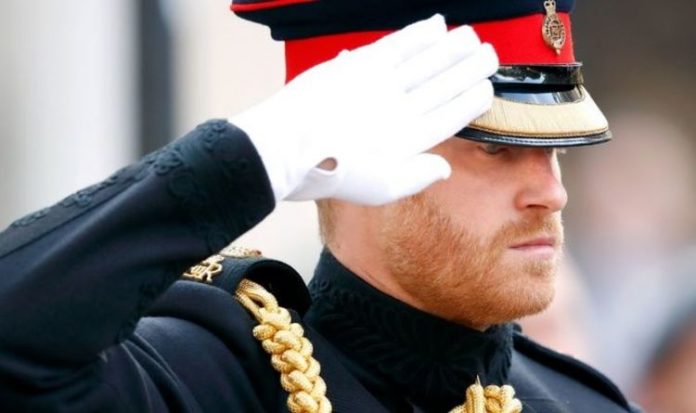 After this year’s PR disaster in LA, Harry may be allowed to take part in the National Service of Remembrance at the Cenotaph with a decision soon, Richard Fitzwilliams said. In three months, the Queen, Prince William and Prince Charles will meet to review the terms of Meghan Markle and Prince Harry’s exit from the Royal Family as its full-time working members.

The expert told Express.co.uk: “Undoubtedly there will be clarification on what participation is considered appropriate for Prince Harry, a former veteran who founded the Invictus Games for wounded service personnel, at next year’s commemoration of Remembrance Day.”

The review, the expert added, will also likely focus on the honorary military titles Prince Harry has relinquished upon stepping down as senior royal.

Mr Fitzwilliams said: “Most importantly for Harry, the decision about his military links, which have been kept vacant, especially that of Captain General of the Royal Marines, is likely to be made during the reassessment.”

Prince Harry did not attend the National Service of Remembrance this year (Image: GETTY)

Two years later, he was bestowed the title of Honorary Air Commandant.

And in 2017 he succeeded his grandfather Prince Philip as Captain General of the Royal Marines.

The Queen will fill these position only at the end of the 12-month transition period.

This decision has been seen as a way for the Queen to leave the door open to a possible return into the royal fold of Prince Harry.

However, the Duke and Duchess of Sussex appear to have settled down in California over the past few months, and it seems highly unlikely they will decide by the spring of 2021 to resume their former roles as full-time working members of the Royal Family.

Upon stepping down in March, Meghan and Prince Harry agreed to relinquish the use of their HRH styles – but have retained their full royal titles.

Prince Harry at the Cenotaph in 2009 (Image: GETTY)

Despite having expressed in January their desire to continue to represent the Queen and the Crown with tours and royal visits, following the summit in Sandringham the couple agreed to give up the right to carry out royal duties.

Moreover, Meghan and Harry ceased to use their first brand, Sussex Royal, on March 31, when they bowed out of their former roles.

While they are no longer “royal patrons”, Harry and Meghan have retained their patronages, respectively 16 and four.

With Megxit, the couple gained the right to live abroad and to become financially independent from the Sovereign Grant.

By no longer receiving taxpayers money, the couple is to be subjected to less public scrutiny and have been given the possibility to carve out a new path – while upholding the Queen’s values.

Within just a few months, Meghan and Harry have struck multi-year deals with two worldwide streaming platforms, which will help widen their reach as well as increase their net worth.

In September, Meghan and Harry announced they had struck a deal with Netflix, which will see them become producers of documentaries, docu-series, TV shows and children programming.

Earlier this month, the Duke and Duchess of Sussex also announced the creation of their production company, Archewell Audio, and its partnership with Spotify.

The Megxit review will take place in March (Image: GETTY)

The couple released a brief teaser on the audio streaming platform to introduce their new project and announce they will release their first complete series of podcast next year.

However, they added, they will share a holiday special later this month.

Meghan has also invested in a female-led company based in Montecito, where the Duchess lives with her family, which is producing vegan oat latte.

Speaking about her investment in Clevr Blends, Meghan did not reveal her financial stake in the company, but said: “I’m proud to invest in Hannah’s commitment to sourcing ethical ingredients and creating a product that I personally love and has a holistic approach to wellness.”