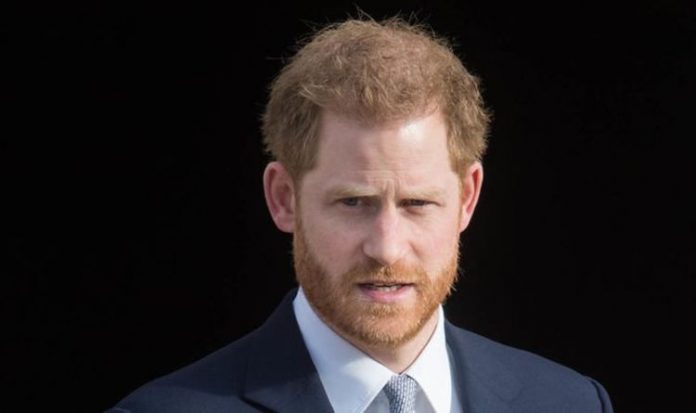 Buckingham Palace courtiers refused Prince Harry’s personal request to have a wreath of poppies laid on his name at the Cenotaph today, according to the Sunday Times. The request, the newspaper added, was denied because the Duke of Sussex is no longer a full-time working member of the Royal Family and doesn’t represent the Crown anymore.

The Queen, who during the ceremony silently stood on one of the balconies of the Foreign and Commonwealth Office facing the Cenotaph, was not made aware of her grandson’s wish, the Times added.

Harry, who now lives in the US with his wife Meghan and son Archie, was not at today’s service.

When contacted by Express.co.uk, Buckingham Palace declined to comment.

Express.co.uk has also contacted Prince Harry’s representatives and Schillings for a comment.

Prince Harry has stepped down as senior royal (Image: GETTY)

Prince Harry first laid a wreath at the Cenotaph when he was 25 (Image: GETTY)

Prince Harry officially stood down as senior royal at the end of March, when he and Meghan Markle relinquished the use of their HRH styles as well as the possibility to carry out royal duties in order to live a more private life.

Prince Harry had also to give up his three honorary military titles and can no longer take part in official ceremonies such as Trooping the Colour wearing his uniform.

According to the deal struck with Prince Charles, Prince William and the Queen, the couple can now live abroad and be financially independent.

The Duke of Sussex, who first laid a wreath of poppies in 2009 aged 25, marked Remembrance Sunday despite being based in Los Angeles.

Taking part in an episode of the podcast Declassified, the Duke of Sussex spoke about how important it is for him to wear a poppy on Remembrance Sunday and what he thinks about when he carries out his royal duty at the Cenotaph.

Speaking to host Michael Coates alongside with other veterans, Prince Harry said: “I wear the poppy to recognise all those who have served, the soldiers I knew, as well as those I didn’t.

The Queen standing on one of the balconies of the FCO during the service (Image: GETTY)

“The soldiers who were by my side in Afghanistan, those who had their lives changed forever, and those who didn’t come home.

“I wear it to celebrate the bravery and determination of all our veterans, and their loved ones, especially those in our Invictus family.

“These are the people and moments I remember when I salute, when I stand at attention and when I lay a wreath at the Cenotaph.”

The Duke also spoke about how important it has been for him to serve his country during his 10 years in the Army, during which he undertook two tours in Afghanistan.

He said: “Being able to wear my uniform, being able to stand up in service of one’s country, these are amongst the greatest honours there are in life.

“These values are put in action through service, and service is what happens in the quiet and in the chaos.

“It’s what happens on and off the battlefield.

Prince Harry served in the Army for 10 years (Image: GETTY)

“It’s about carrying out our duty as soldiers.

“For me as a father, a husband and as a human being, it’s about how we uphold these values in every aspect of our lives.”

The socially-distanced service in Whitehall saw only senior members of the Royal Family as well as politicians and representatives of the Commonwealth standing by the Cenotaph.

Prince Charles, Prince William, Prince Edward, Princess Anne and the Duke of Kent laid wreaths of poppies at the monument.

The Queen, Kate, Camilla, Sophie and Sir Timothy Laurence looked on from the balconies of the FCO.