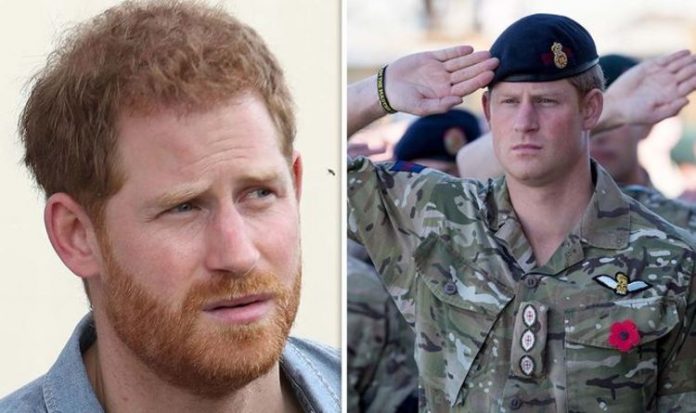 The Duke of Sussex enjoyed an illustrious 10-year career with the British Army, serving in war-torn nations such as Afghanistan – where he fought against the Taliban. But following the “tough decision” to step down from his role in the Army and enter back into the Royal Family fold in 2015, Harry “found himself at a loose end”, the new biography of the Duke and Duchess of Sussex ‘Finding Freedom’ claims. During this period of reintegration back within society, Harry would routinely suffer panic attacks as he got to grips with the glaring spotlight that had not followed him since he joined the Army in 2005.

The new book, written by royal reporters Carolyn Durrand and Omid Scobie, reports that he would confide in his brother Prince William, who himself was once a member of the Armed Forces.

Yet, beneath the public image Harry purveyed, the now-35-year-old was struggling.

The book says: “Anger and anxiety started to bubble to the surface, and neither emotion fit into the official persona of a prince.

“At royal engagements he suffered panic attacks. In the most proper and officious of settings, such as a reception by MapAction to mark Harry’s new patronage of the humanitarian emergency response charity, the flight-or-fight instincts of an Apache helicopter pilot kicked in.

“A source remembers that when Harry left the event held at the Royal Society in London, ‘He just started taking in deep breaths.

READ  Brexit news: Theresa May must do THIS to maintain power | Politics | News - UK

“‘The people, the cameras, the attention,’ the source said. ‘He had just let it get to him. He was on the edge.'”

Although Harry and William remained rocks for one another during this difficult period, the siblings have endured a difficult relationship recently, culminating in the Duke of Sussex – alongside his wife Meghan Markle – taking a step back from senior Royal Family life.

The alleged row between the once close brothers stems, Ms Durrand and Mr Scobie say, after William referred to Meghan as “this girl”, before Harry decided to marry the former US actress.

JUST IN: Diana statue to go up where Harry and Meghan announced engagement

“It was precisely because of this that William confronted his brother about his mental health.

“As Harry later recounted in a podcast interview with the columnist and friend Bryony Gordon, who herself has obsessive-compulsive disorder, he said, ‘You really need to deal with this. It is not normal to think that nothing has affected you.'”

Monday marks the 23rd anniversary of William and Harry’s mother Diana’s death, after she passed away in a Parish car crash in 1997.

Normally, the brothers would spend the day together, but for the first time the brothers are set to spend the occasion on different sides of the world.