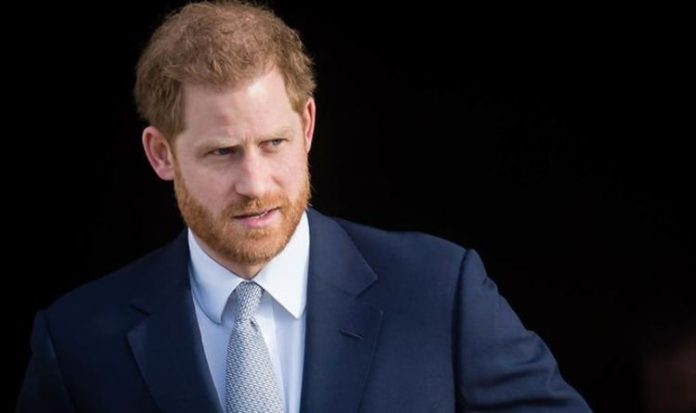 Prince Harry was angry after he had been informed he and Meghan would not take part in the procession at the Commonwealth Day service, royal author Robert Lacey has claimed. The author reported in his book Battle of Brothers how the Sussexes had been shunned from the traditional procession which sees senior royals following the Queen through the aisle of Westminster Abbey before the start of the service.

Hours before the event was to take place, Kate and Prince William, on the other hand, were still scheduled to wait for the Queen’s arrival at the Abbey and follow her to their seats rather than being quietly escorted there alone by aides.

This decision, Mr Lacey noted, would have made the different statuses enjoyed by the heir, William, and the spare, Harry, more evident to the public.

He wrote: “When Harry heard that he and Meghan were to be so graphically shunted aside on this final appearance, he was furious.

“The subservience of a ‘spare’ – one of the basic reasons for this very sad parting of the ways – could not have been more strikingly illustrated.”

The Duke of Cambridge, however, changed these plans last-minute and agreed on entering the Abbey with Kate shortly after his brother and sister-in-law.

Mr Lacey wrote: “The phone lines had hummed over the preceding weekend (the service was on a Monday afternoon) – and fortunately Prince William had more sense than his underlings.

“He and Kate would be quite happy, he declared, to skip the procession and to take their places without ceremony in the congregation alongside Harry and Uncle Edward.”

The exclusion of Meghan and Harry from the line-up and the upset it created was discussed also by Finding Freedom’s author Omid Scobie and Carolyn Durand.

The royal experts wrote in their book: “The decision had been made without their consultation, and they were informed long after the two thousand orders of service had been printed for guests, with their names notably absent.

“This year it would just be the Duke and Duchess of Cambridge, the Prince of Wales, and the Duchess of Cornwall walking through the Abbey with the monarch. It felt intentional.

“‘Harry was more than disappointed,’ a friend said.

“‘He spoke up, but the damage had already been done’.”

A source close to the Sussexes was also reported in the book saying: “It should have been the one public moment where the royal family put their arms around the couple for a show of support.

“They purposefully chose not to put them in the procession and not to be welcoming. It was most unpleasant.”

At the time, Buckingham Palace said there was “no set format” for the event, suggesting the line-up could change every year.

Just minutes before the royals arrived at Westminster Abbey, royal commentator Rebecca English broke the news the Cambridges and the Sussexes would not take part in the Queen’s procession.

She wrote on Twitter: “Confirmed: The Duke and Duchess of Sussex will not be part of the Queen’s procession through Westminster Abbey at the start of the Commonwealth Service as they make their final official appearance as senior royals.

“Harry and Meghan are joining the Queen, the Prince of Wales, the Duchess of Cornwall and the Duke and Duchess of Cambridge as they carry out their last public royal duty before they step down as senior working royals.

“But unlike last year, Harry and Meghan will be conducted to their seats rather than waiting for the Queen’s arrival and walking through the Abbey with the monarch and other senior royals.”

On that day, the three couples were seen chatting.

Meghan and Charles were even spotted sharing a laugh ahead of the beginning of the ceremony.

In March 2020, on the other hand, the Sussexes and the Cambridges exchanged only a few nods and words to greet each other.