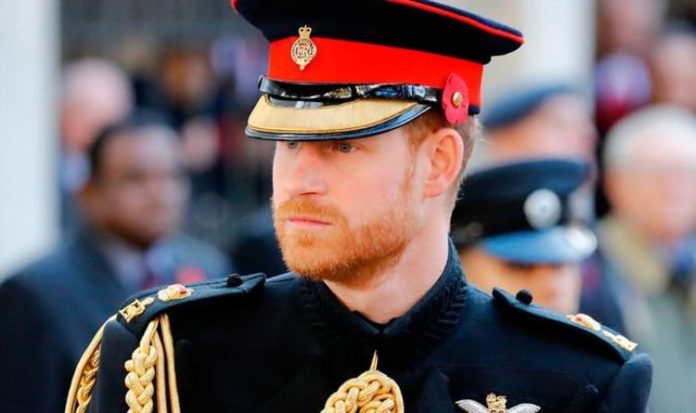 Prince Harry made a surprise appearance alongside other veterans on the Declassified podcast, hosted by Michael Coates. During the programme, the Duke of Sussex touched upon several topics – including why he wears a red poppy and how much his uniform matters to him.

Harry, who served in the British Army, is spending his first Remembrance Sunday in the US with his wife Meghan and so Archie.

The Duke was said to be devastated after he was stripped of his military titles following his decision to resign as a senior royal.

Explaining why he will wear a red poppy today, Harry said: “I wear the poppy to recognise all those who have served, the soldiers I knew, as well as those I didn’t.

“The soldiers who were by my side in Afghanistan, those who had their lives changed forever, and those who didn’t come home.

Prince Harry took part in a podcast ahead of Remembrance Sunday (Image: GETTY)

“I wear it to celebrate the bravery and determination of all our veterans, and their loved ones, especially those in our Invictus family.

“These are the people and moments I remember when I salute, when I stand at attention and when I lay a wreath at the Cenotaph.”

Prince Harry, who was in the Army for 10 years and served in two tours in Afghanistan, usually takes part in the National Service of Remembrance alongside other members of the Royal Family including his father Prince Charles and brother Prince William.

However, this year, the Duke of Sussex hasn’t been able to fly from the US, where he now lives, and attend the ceremony due to the ongoing coronavirus pandemic.

Prince Harry and Meghan Markle at the Field of Remembrance in 2019 (Image: GETTY)

Traditionally, Prince Harry has also carried out several other events in the run-up to Remembrance Sunday, including meeting veterans and open the Field of Remembrance.

During the podcast, he spoke about how important his service and his uniform are for him.

He said: “Being able to wear my uniform, being able to stand up in service of one’s country, these are amongst the greatest honours there are in life.

“These values are put in action through service, and service is what happens in the quiet and in the chaos.

“It’s what happens on and off the battlefield.

“It’s about carrying out our duty as soldiers.

“For me as a father, a husband and as a human being, it’s about how we uphold these values in every aspect of our lives.”

Prince Harry lost the three honorary titles of Captain-General of the Royal Marines, honorary Air Force Commandant of the Royal Air Force Bas Honington and honorary Commodore-in-Chief of the Royal Navy’s Small Ships and Diving Operations upon stepping down as senior royal alongside his wife Meghan Markle.

The Queen has yet to fill these positions, a move seen by some royal watchers as a way to leave the doors open to a possible return of Harry before the end of the post-Megxit transition period in March next year.

Despite having lost these titles, the Duke remains as committed as ever in his support to veterans as well as servicemen and servicewomen who got injured or sick in the line of duty.

Prince Harry served in the Army for 10 years (Image: GETTY)

His most important initiative in the field is the Invictus Games.

He said: “I’ve been fortunate enough to meet the most incredible veterans over the years, the banter with Chelsea Pensioners to the veterans in the field remembrance, all the D-Day vets, they all hold a really special place in my heart.

“And with any of these guys it’s like meeting a mate.

“We may not have served together, but we stand together with a shared understanding.”