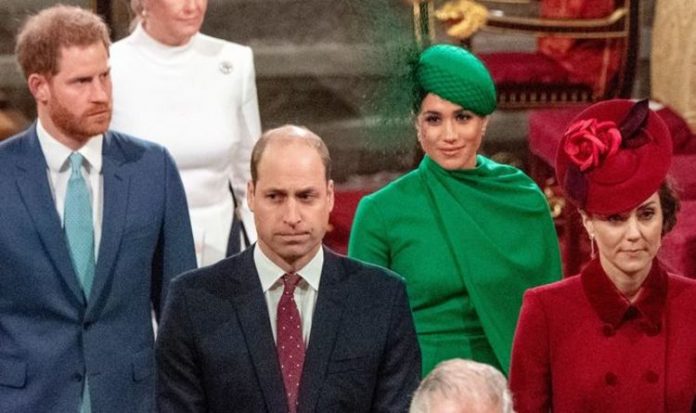 Prince Harry had long been known for his “turbulent” relationship with on-again, off-again girlfriend Chelsy Davy by the time Kate, the Duchess of Cambridge and Prince William married in 2011. Harry and Chelsy had officially broken up the year before but rumours of reconciliation surfaced after the South African businesswoman was spotted at Westminster Cathedral during the wedding ceremony. But according to royal author Katie Nicholl, Kate and William’s marriage only cemented Chelsy’s views that Royal Family life “was not for her.”

Ms Nicholl, the author of ‘Harry: Life, Loss and Love,’ said: “Being part of the royal wedding had made Chelsy’s mind up once and for all.

“The life of a royal bride was not for her and she told Harry she could never make the sacrifices Kate had made.”

The royal commentator reported one of Chelsy’s friends had reported she “truly loved” Prince Harry but had concluded she could not cope with the constant spotight.

Ms Nicholl continued: “It was just after the royal wedding when she realised she couldn’t cut it.

“She saw what it would be like in the spotlight, and she didn’t want that life for herself.

“She truly loved Harry, but knew this wasn’t a life she could lead.”

Despite the break up, Prince Harry and Chelsy Davy remained close friends and she even attended his wedding to Meghan Markle in May 2018.

Over the years, the Duke of Sussex also developed a growing distaste for public scrutiny, even more so since he married the Duchess.

The royal couple also stepped away as lead-patrons of the Royal Foundation they managed alongside Prince William and Kate to focus on a new non-profit organisation.

Archewell was expected to see the light of day in the Spring of 2020 but plans had to be postponed because of the coronavirus pandemic.

Meghan and Harry lent their time and efforts to helping vulnerable people in the Los Angeles area throughout the lockdown.

And the pair have also shed some insight on the projects they are likely to embrace over the coming months with their outspoken support of the Black Lives Matter movement and condemnation of hate speech.