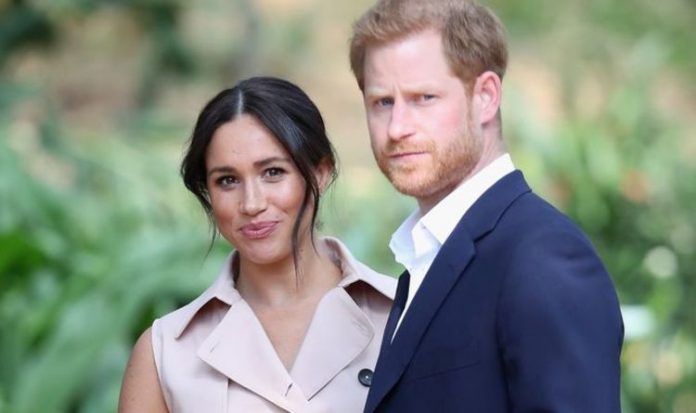 Royal biographer Angela Levin claimed that Prince Harry is no longer the same person he once was when she interviewed him prior to writing his biography in 2018. While speaking on talkRADIO with Mike Graham, she reflected on the relationship between Harry and Meghan Markle. Following reports they will launch an honours list via their new charitable organisation Archewell, where they will celebrate people of interest, Ms Levin attacked the pair for their recent behaviour.

Ms Levin said: “I am astonished that Prince Harry has given up caring one iota about his family and his wonderful grandmother.

“He was such a great man when I met him and spent over a year with him.

“Now, he just looks terrified if ever he speaks in case he is going to get a telling off from Meghan.

“To agree to something like that is simply nonsense.”

DON’T MISS: Prince Harry warned of ‘losing himself’ with Meghan Markle in awards

Ms Levin and Mr Graham then began discussing the announcement of an honours list from Meghan and Harry.

Ms Levin said: “Meghan and Harry want stand out players, do you know what that is? I don’t.”

Mr Graham said: “They are looking for people who have given charitable services, people who have talked about science, literature, racial justice, gender equity, environmental stewardship, youth empowerment, health and mental health.

“We all talk about those things but I imagine they would be so adverse.

“It is all meaningless isn’t it.”

The Duke and Duchess have faced criticism over this announcement with some insisting that it is designed to rival the Queen’s honour list.

In response to the criticism, Archewell’s press secretary Toya Holness said: “We look forward to sharing more about Archewell’s work in the weeks ahead, but any suggestion that it is intended to rival the UK honours list is false.”