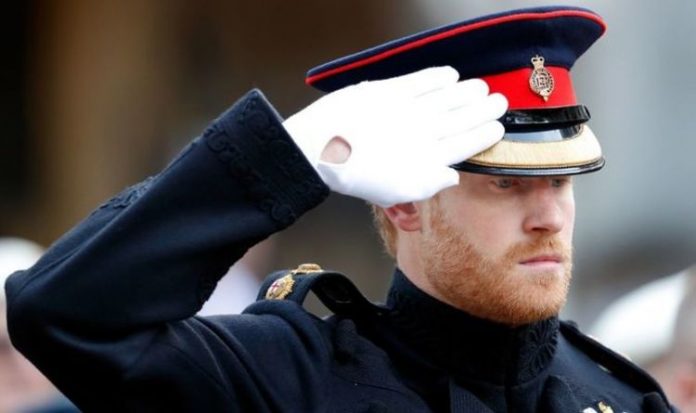 Prince Harry had to step down as Captain General of the Royal Marines when he officially quit as a senior royal at the end of March. The loss of his military titles was reportedly “devastating” for the Duke, and it has now emerged the Palace is not looking to reinstate Harry’s titles at the end of his 12-month review.

Prince William is set to replace his younger brother as the new head of the Royal Marines.

Interestingly, a royal expert has said the Duke’s recent comments on the upcoming US presidential election may have contributed to the status quo.

Commenting on the plans for Prince William to become the new Captain General of the Royal Marines, Richard Palmer, royal correspondent at the Daily Express, said: “The headline in the paper doesn’t mention Harry but it will undoubtedly be a blow to him if this happens.

“The Sussexes’ intervention in the US presidential election, no matter how carefully worded, was deemed by palace officials to have crossed a line.

“It’s likely to have effects.”

Last month Meghan and Harry appeared in a video in which they seemingly endorsed Joe Biden to win November’s presidential election.

Meghan urged Americans to vote in the “most important election of our lifetime”, while Harry told voters to “reject hate speech, misinformation and online negativity”.

The loss of Harry’s military titles was agreed during the Sandringham summit, where the Duke discussed the terms of his split from the Royal Family with the Queen, Prince Charles and Prince William.

Buckingham Palace said the Duke and Duchess of Sussex “understand that they are required to step back from royal duties, including official military appointments”.

The decision to formally replace him will come as a blow to Harry, who is said to have hoped to resume his ceremonial duties.

In March, just before his move to Canada, he reportedly told the Commandant General Royal Marines, Matthew Holmes, that he was “devastated that I am having to step down,” adding: “I feel I’m letting people down, but I had no choice.”

Though Harry technically continues to hold the rank of Captain General, under the terms of his agreement he is not allowed to use his military appointments “as they are a gift of the sovereign”.

The agreement also states: “No new appointments will be made to fill these roles before the 12-month review of the new arrangements is completed.”

But an insider said plans are already being made.

The source told the Sunday Express: “The Corps is, in effect, without a Captain General and we really must get on and fill this role” said the source last night.

“The decision has been made to invite Prince William to take over this important duty, largely on the basis that the Duke of Sussex has given no reason to believe that he will alter current arrangements. Quite the opposite, in fact.”