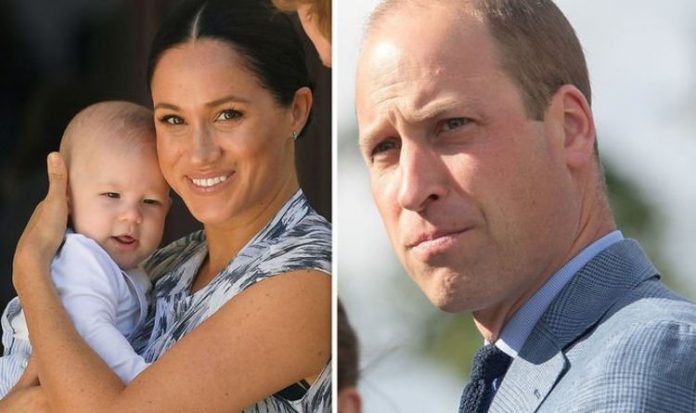 Meghan Markle and Prince Harry’s decision not to reveal the identity of their son Archie Harrison’s godparents ruffled royal feathers and prompted public backlash at the time. The Sussexes’ choice to give Archie a private christening in July 2019 coincided with the revelation they had spent £2.4 million taxpayer’s money doing up their Windsor home Frogmore Cottage.

However, not only was Archie’s christening kept out of the public eye, taking place in a private chapel at Windsor Castle, key details around the event – including the identity of the royal baby’s godparents – were kept secret.

Prince Harry is sixth-in-line to the throne and while Archie is unlikely to ever be king, the christening decision broke with royal protocol, author and royal expert Robert Lacey has claimed.

Extracts from Mr Lacey’s new book Battle Of Brothers: William, Harry And The Inside Story Of A Family In Tumult have been serialised in the Mail on Sunday and chronicle the events around baby Archie’s christening.

Mr Lacey writes: “Then came the real crunch: the godparents.”

Mr Lacey adds: “‘Secret sponsor’ has a dodgy sound to it. And it is an ingredient of Britain’s representative monarchy that the people should have the right to know who is giving moral guidance to their possible future king or queen.

“Here again, however, precedent, protocol and practice all collided headlong with Harry and Meghan’s firm insistence on their privacy — and that of their new baby.”

He writes: “Confirming the palace announcement, the Sussex Royal office made clear that the whole ‘sponsor’ issue was non-negotiable.

“The godparents’ names would not be revealed.

“‘Friends’ of William suggested that the future King, only five places clear of Archie in the order of succession, could not comprehend how such a basic matter of constitutional principle had been misunderstood.

“How could any new Windsor royal be christened in a meaningful sense without the newcomer’s sponsors being known, if not present?”

Battle Of Brothers: William, Harry And The Inside Story Of A Family In Tumult will be published by William Collins on October 15 at £20.

A description of the book reads: “From royal expert and bestselling author Robert Lacey, this book is an unparalleled insider account of tumult and secrecy revealing the untold details of William and Harry’s early closeness then estrangement.

“It asks what happens when two sons are raised for vastly different futures – one burdened with the responsibility of one day becoming king, the other with the knowledge that he will always remain spare.

“How have William and Harry each formed their idea of a modern royal’s duty and how they should behave?

“Were the seeds of damage sowed as Prince Charles and Diana’s marriage painfully unravelled for all the world to see?”

“In the previous generation, how have Prince Charles and Prince Andrew’s lives unfolded in the shadow of the Crown? What choices has Queen Elizabeth II made in marshalling her feuding heirs?

“What parts have Kate Middleton and Meghan Markle played in helping their husbands to choose their differing paths? And what is the real, unvarnished story behind Harry and Meghan’s dramatic departure?

“In the most intimate vision yet of life behind closed doors, with the family’s highs, lows and hardest decisions all laid out, this is a journey into royal life as never offered before.”