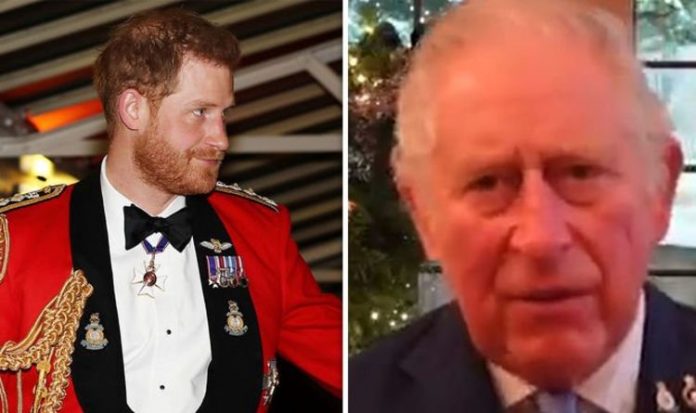 The future king concluded: “To you and your families, wherever you may be, I can only wish you all a very Happy Christmas and a safe and healthy New Year.”

The message is likely to have struck a chord with Prince Harry who may have wished to honour the forces in a similar manner.

However, since moving away from the royal bubble, Harry is no longer able to deliver official messages on behalf of the Royal Family.

While Meghan and Harry were expected to return to Britain for a visit over the summer, the couple have been stuck Stateside due to the pandemic.

In November, Harry was unable to attend the Royal Family’s official Remembrance Day commemorations in Whitehall where he has laid a wreath in previous years.

In the wake of a Megxit deal being reached with the Queen last January, Harry alluded to his disappointment at having to let go of his ceremonial military roles.

Speaking at a charity dinner, he said: “What I want to make clear is we’re not walking away, and we certainly aren’t walking away from you.

“Our hope was to continue serving the Queen, the commonwealth, and my military associations, but without public funding. Unfortunately, that wasn’t possible.”

He added: “I’ve accepted this, knowing that it doesn’t change who I am or how committed I am.