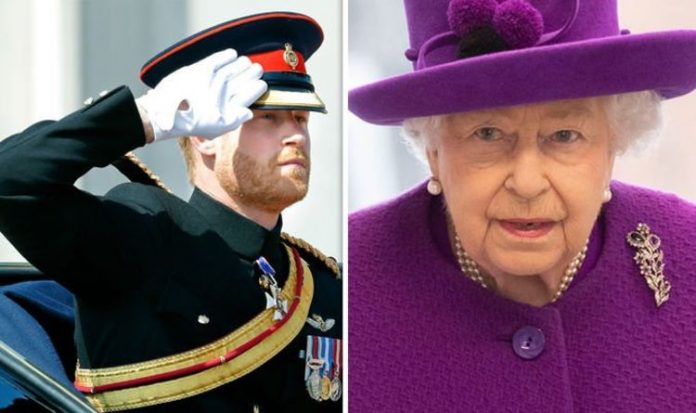 Prince Harry, 36, and Meghan Markle’s, 39, decision to step down as senior royals plunged the monarchy into crisis at the start of the year. An exit deal was swiftly agreed with the Queen but it was not without its sacrifices. While Harry and Meghan have been allowed to keep their royal titles and HRH styles for now,  Queen Elizabeth II insisted her grandson give up the honorary military titles he held as a senior royal.

Harry has held onto the ranks of Lieutenant Commander of the Royal Navy, Major of the British Army and Squadron Leader of the Royal Air Force he earnt during his 10-year career in the forces.

However, he had to give up the ceremonial positions of Captain General Royal Marines, Honorary Air Commandant, RAF Honington and Commodore-in-Chief, Small Ships and Diving, Royal Naval Command when he stepped away in March.

The Duke is said to have been deeply saddened about having to give up the treasured roles and a royal commentator has claimed he still hopes to get them back.

Since stepping away from the royal bubble in March, Harry and Meghan have settled with their one-year-old son Archie Harrison in Montecito, California.

The couple have gained financial independence from the Royal Family having signed lucrative commercial deals with both Netflix and Spotify.

Nonetheless, Harry may still be pining for his old military titles.

Reflecting on the year Meghan Markle and Prince Harry have had, royal commentator Richard Fitzwilliams told Express.co.uk: “It has been a momentous year for them, they have hardly ever been out of the news and though the invasion of their privacy was one of the reasons they found royal life so demanding, they have experienced intrusion subsequently and this may well periodically occur.”

He added: “They have achieved financial independence with a highly lucrative deal with Netflix and also to produce podcasts for Spotify as well as future engagements for the Harry Walker Agency and launching their non-profit charitable organisation, Archewell when circumstances permit.”

Mr Fitzwilliams added: “They will count this as a plus as they are free of any obligation to the British taxpayer.”

Touching on Meghan’s recent revelation that she had invested in vegan coffee start-up Clevr Blends, Mr Fitzwilliams said: “When Meghan revealed that she invested in a Clevr Blends she made an error of judgement, there are dangers in such links with commercial products.

“Their language is considered far too ‘woke’ by many in Britain but their aim is to speak to the younger generation especially in the United States and the wider world.”

The Queen is due to review the royal exit deal she made with Meghan Markle and Harry in March but there is a slim chance Harry will get his titles back.

He added: “There is the next Invictus Games in The Hague and they will be expected to visit Britain with Harry’s grandfather Prince Philip turning 100 in June.”

Mr Fitzwilliams claimed Harry and Meghan’s move away from royal life was a “tragedy” but admitted it has given them more freedom.

He added: “It is a tragedy for the monarchy that they found they were surviving not thriving, but for them, it opens up new opportunities.

“However, they will always be in the public eye and finding freedom, and they should have ensured the farcical book bearing that title about them was not published, has its price.”