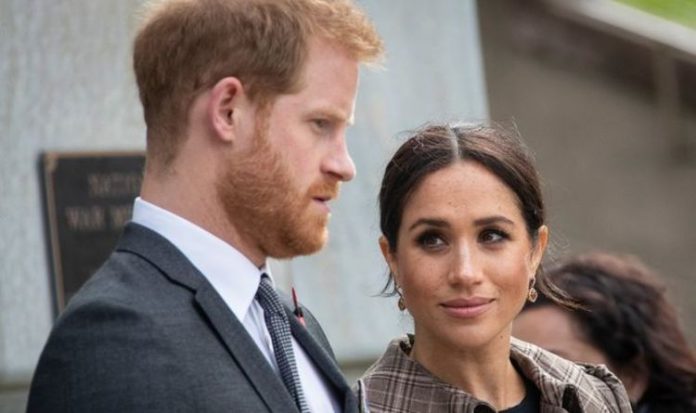 Royal commentator Camilla Tominey warned the Duke and Duchess of Sussex’s televised interview with US talk show host Oprah Winfrey puts Harry in a “very tricky position”. The Telegraph’s associate editor said the Queen’s grandson is being forced to “negotiate the ambitious former actress’s desire for both maximum publicity and unprecedented privacy while ensuring that already bitter relations with the royals do not sour even further”.

Writing in the newspaper, Ms Tominey said: “For – make no mistake – this is now Harry’s battle to fight alone.

“Having always had an eye on the bigger prize of American adulation over British blandishments, Meghan appears to have little intention of returning to the UK.

“But for a blood-born British prince still seemingly desperate to keep up his royal and military ties, it is much more complicated.”

The Queen’s grandson will join his wife for part of the interview, which airs next month.

Ms Tominey branded it “the Meghan show with a side order of Harry” and insisted the British public does not want “Hollywoodised royals”.

She added: “While Meghan may choose to ignore the couple’s plunging popularity ratings over here, it is much harder for Harry to turn his back on a Blighty which still, somewhat grudgingly, sees him as part of the Windsor establishment and remembers his undoubted contribution to British life with genuine fondness.

“From the Beatles to Downton Abbey, British exports to the US only really succeed when they maintain their popularity at home.

“Harry risks losing his way completely if, in blindly following his wife’s pursuit of ever greater Stateside glory, he forgets where he came from.”

He tweeted: “The Duke & Duchess of Privacy have given an exclusive ‘wide-ranging’ prime-time interview about their private lives to Oprah Winfrey for a 90-minute special airing on CBS on March 7.

“This is beyond parody, but true.”

Since stepping down as senior working royals, they have signed lucrative deals with Netflix and Spotify.