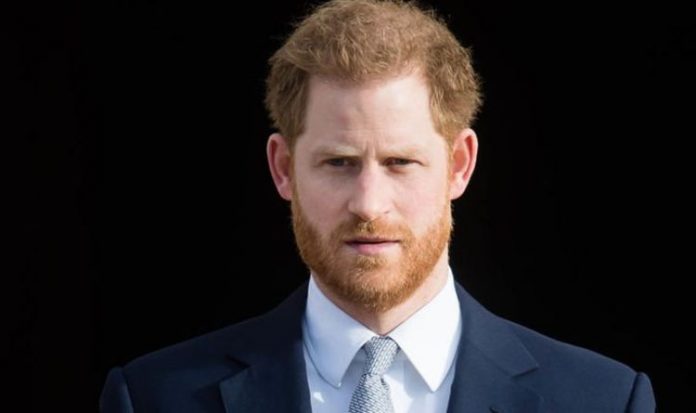 Royal author Lady Colin Campbell said Harry appeared to be “arrogant enough” to think he can “shut down the whole world” with his calls for a rethink. He has linked social media with the spread of misinformation and also said it led to incidents like the January 6 US Capitol riot in Washington DC.

Lady Campebell, who is also a former I’m a Celebrity… Get Me Out of Here contestant, lashed out at the Duke of Sussex on a new episode of her podcast Chatting with Lady C.

She said: “Harry is determined to make as many enemies as he can out of people who relish freedom of speech.”

Lady Campbell said there already were numerous laws in place to protect people and there was no need for what she termed a “censorship agenda”.

She said: “He doesn’t understand, or thinks he can get away, or maybe he understands and maybe he is arrogant enough to think he is in such a position of power and privilege, that he can shut down the whole world and prevent people from speaking their minds freely.

“There are sufficient laws in place in all of the Western democracies that if people defame you, you can sue them.

“I do think actually in fairness, as I say that, the laws of defamation have been loosened up a bit too much.

“But that doesn’t mean that people should be muzzled.

“It means that people who defame other people should be made accountable, more easily and less expensively, than they are at the moment.”

She also said his views were “a danger to the monarchy”, adding: “He is a part of the Royal Family …. if they wish him to give him the liberty to poison their pond that’s their decision.”

Harry has been outspoken in recent weeks on the need to rethink social media.

Through the Archewell Foundation, the Duke of Sussex has partnered up with organisations aiming to understand technology’s impact on people and society.

In August, Harry said social media had been used to stoke crises of truth, health and hate.

And after the US Capitol was stormed by supporters of Donald Trump on January 6, the Duke called for social media platforms to be held accountable for the riots and the circumstances enabling them and asked for the remodelling of the digital world.

Speaking to Fast Company, he said social media should be regulated but also reflect real life and include disagreements, conversations and different views.

He said: “The truth is, despite its well-documented ills, social media can offer a means of connecting and community, which are vital to us as human beings.

“We need to hear each other’s stories and be able to share our own.

“That’s part of the beauty of life. And don’t get me wrong; I’m not suggesting that a reform of the digital space will create a world that’s all rainbows and sunshine, because that’s not realistic, and that, too, isn’t life.

“There can be disagreement, conversation, opposing points of view — as there should be, but never to the extent that violence is created, truth is mystified, and lives are jeopardised.”

Using London’s Speakers’ Corner as an example of how a public space for debate can be regulated while also protecting free speech, Harry also said: “This concept of a ‘public square’ isn’t anything new — it can be traced back to the early days of democracies.

“You get up there and speak your piece. There are ground rules. You can’t incite violence, you can’t obscure who you are, and you can’t pay to monopolise or own the space itself.

“Ideas are considered or shot down; opinions are formed. At its best, movements are born, lies are laid bare, and attempts to stoke violence are rejected in the moment.

“At its worst, intolerance, groupthink, hate, and persecution are amplified.

“And at times, it forces lines to be drawn and rules or laws to emerge or be challenged.”