After Meghan and Harry stepped down from full time Royal Family duties in March, the couple have bought a house in Montecito, California. Now in a video call with the Rugby Football League, the Duke of Sussex has lavished praise on the couple’s outdoor space, but admitted it will be perfect for practicing his old favourite sport rugby, which isn’t played as much in the US. It comes as the former Sussex royals have started work on new projects.

Celebrating 125 years of the rugby league, Harry opened up about how his “unbelievably fortunate” for his huge garden space.

He said it is ideal to play with Archie, but he needs just one more thing to make it perfect.

Harry added: “What I need is a few mini rugby balls that I can then get Archie involved with the game, because at the moment it’s impossible to find any.

“But I’ve got a little space outside, which I’m fortunate enough to have so I need to get him playing some Rugby League.”

READ MORE: Prince Harry says he is ‘loving’ life in US with Meghan in new video from £11m LA home

Prince Harry news: The Duke of Sussex has revealed what he is most ‘grateful’ for in his new home (Image: PA)

Prince Harry news: Harry revealed he loves his garden as it gives him space to play with Archie (Image: Twitter / RFL)

Harry went on to reference his gratitude for the space is in part due to the coronavirus pandemic taking away other people’s access to public spaces.

He said: “I’m just unbelievably fortunate and grateful to have outdoor space and see my son be able to be outside, because I know so many people just haven’t had that opportunity in the last five months.”

The Duke continued to say his son is his and Meghan’s “No. 1 priority, but our work after that is the second priority.”

He added: “And we’re just trying to do everything we can to do our part to make the world a better place.”

Prince Harry news: The one-year-old and the Duke need ‘a few mini rugby balls’ according to Harry (Image: PA)

Prince Harry news: He announced his plans to get Archie into the sport on a video call with the RFL (Image: Twitter / RFL)

It has nine bedrooms, 19 bathrooms and includes a two bedroom, two bathroom gatehouse on the property.

Even more amenities are afforded to the Sussex royals at their new home, with outdoor features including a rose garden, tall Italian cypress trees, century-old olive trees, a tennis court, tea house, children’s cottage, and a pool.

Harry has been a longtime lover of rugby, remaining the royal patron of the Rugby Football League despite stepping down from royal duties.

One of the Duke’s last engagements as a full time royal took place in January, where he drew the fixtures for the 2021 Rugby League World Cup.

In the call on Saturday, Harry also revealed he wants to return to the UK next year for the tournament.

He added: “We’ve got a whole Rugby League World Cup coming next year, so I definitely plan on coming back.

The Duke also appears to be wanting Archie to become a fan too, with Harry dressing up his son in an England jersey last year.

England’s Sam Underhill revealed the team got a pregame boost from the Duke when he shared a photo of Archie in the gear.

He said: “Prince Harry sent us a nice message of support, which was nice to receive.

“He showed his little lad in an England shirt, so that was a nice touch.” 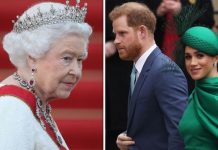 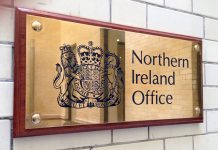 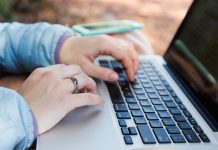