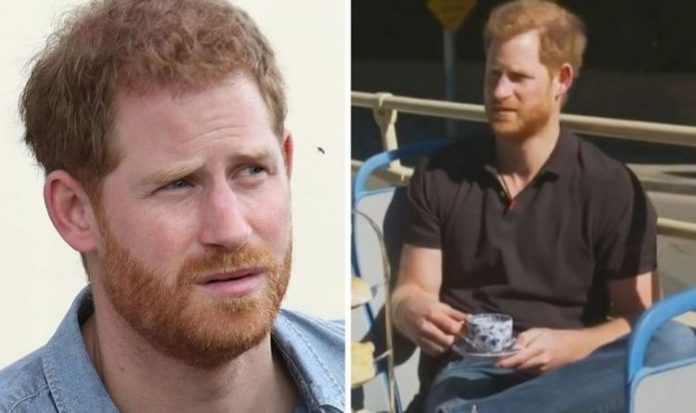 Prince Harry drinks tea on a bus with James Corden

The Duke of Sussex, who has discussed his concerns for the environment at length over the past decade, was back in the spotlight when he chatted to his friend, and Gavin and Stacey star, James. During the exchange, the pair chatted about Harry’s time in the Royal Family, the Netflix drama The Crown, as well as his son Archie. The interview, which was filmed earlier this month, also saw Harry and James cruise across Los Angeles, where the Duke lives with his wife Meghan Markle.

But observers were quick to notice the apparent double standards of Harry driving around on a bus, with four motorbikes and a Range Rover following him, as he has previously claimed more needs to be done to stop climate change, and the release of carbon emissions.

Like his father Prince Charles, Harry has been a vocal voice in the climate change debate, even admitting he would only have two children for the sake of the environment during a 2019 interview with conservationist Dr Jane Goodall.

And columnist Clemmie Moodi noted that Harry’s “smart idea” to get on a “gas-guzzling double-decker” was reminiscent of previous scandals regarding his climate change activism.

She was referring to the saga over Harry and Meghan taking a string of private jets across Europe in 2019, after their first son Archie was born.

Prince Harry on the bus with James Corden (Image: YOUTUBE)

Writing in , Ms Moodi said that “private jet-loving Harry is no stranger to accusations of hypocrisy”, and that “pride of place on his woke CV is a commitment to climate change”.

She continued: “Naturally, then, Harry decided it would be a smart idea to appear on telly atop a gas-guzzling double-decker.

“To make things even more environmentally efficient, just five people were on board the top deck of said double-decker.”

She argued that this sort of thing “doesn’t happen on the C39 – not evening in Covid times”, adding: “Trailing them were two police motorbikes and a Range Rover. Leading the big red cavalry were two more motorbikes.”

JUST IN: Harry is ‘upbeat’ but not ‘totally comfortable’

Prince Harry has spoken about the environment previously (Image: GETTY)

The original private jet row emerged after Harry and Meghan had taken a series of flights, including to Nice, France, in order to stay at Sir Elton John’s home.

At the time, Harry had written a post on the now-defunct Sussex Royal Instagram page, pleading that “with nearly seven billion people inhabiting this Earth, every choice, every footprint, every action makes a difference”.

The backlash experienced was brutal, and saw Sir Elton himself speak out to defend the Sussexes.

The Rocket Man crooner, who was close with Harry’s mother Princess Diana, claimed in a social media post that he had provided them with the private jet, and that the method of transport was carbon neutral.

Harry and Meghan on their wedding day (Image: GETTY)

He added: “To support Prince Harry’s commitment to the environment, we ensured their flight was carbon neutral, by making the appropriate contribution to Carbon Footprint.

“I highly respect and applaud both Harry and Meghan’s commitment to charity and I’m calling on the press to cease these relentless and untrue assassinations on their character that are spuriously crafted on an almost daily basis.”

Before the criticism, Harry and Meghan were reportedly keen to take economy flights, in a move similar to that of the Duke’s brother Prince William, and his wife Kate, Duchess of Cambridge.

In 2018, the Sussexes were seen taking a flight to France as they celebrated their first New Year together as a married couple.

READ  London panic: Police rush to the scene as women dies in park in the capital | UK | News (Reports)

ITV’s Lorraine Kelly questioned why the couple, and other royals, were keen to take the cheaper form of transport when going on their holidays.

She asked royal correspondent Victoria Murphy: “We understand that the couple went to the south of France and they went economy and everybody was like freak, horror! Why did they go economy though, when they could have chartered a private jet?”

Ms Murphy said: “You know the royals do fly economy, particularly the young royals. They do like to take scheduled flights, sometimes William and Kate have flown economy up to Scotland from time to time.

“When they take shared flights, they like to be as discreet as possible, so maybe kind of skulking at the back, in economy, which is what they did.”

More recently, Harry and Meghan ruffled the feathers of the Royal Family after it was announced they would be taking part in a feature-length interview with host Oprah Winfrey.

Following the announcement, the couple were stripped of their patronages and titles by the Firm, just over a year after they quit their senior royal duties, as they wished to lead a “financially independent life”.