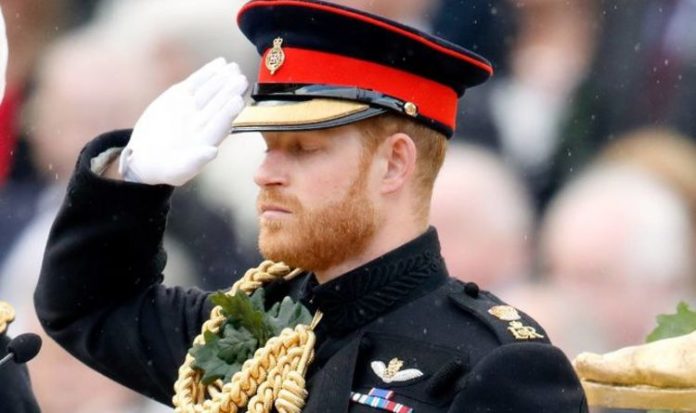 The Duke and Duchess of Sussex quit as senior working royals in March for more freedom to earn their own money. They still remain members of the Royal Family and have retained their HRH styles, although they do not use them. As part of the deal over stepping down, they agreed to have a royal review with the Queen a year later in March 2021. This would include a review of Harry’s military titles after he was reportedly “devastated” to have to give them up, according to the Finding Freedom biography.

Their recent lucrative deals with Spotify and Netflix may not concern Her Majesty when she examines their year, as Daily Express royal correspondent Richard Palmer said Harry’s comments to “reject hate speech” before the US election may have caused more anger.

He tweeted: “Nothing has been decided yet but I imagine both sides will make the split permanent.

“It’s always dangerous to second guess the Queen but it looks as if the US political intervention was the final nail for Harry’s hopes of retaining any military patronages on behalf of Her Majesty.”

Members of the Royal Family do not vote, with the Queen being traditionally politically neutral.

Prince Harry may have to give up his royal titles (Image: GETTY)

It is considered unconstitutional for other royals to vote, but UK law does not ban this.

Mr Palmer added the couple speaking in the US on matters concerning the election would still be treated as a “major breach” over in the UK.

He said: “It was taken really seriously as a major breach of undertakings they had given voluntarily, unlike the commercial deals as far as I can tell.”

At the time, a spokesperson for the couple said the comments did not refer to any specific political party or candidate but were instead “a call for decency”.

READ MORE: Harry to miss out on ‘favourite Christmas tradition’ away from William

Prince Harry was said to be “devastated” over giving up his titles (Image: GETTY)

The Duke and Duchess of Sussex had appeared in a live video as part of the Time 100, which was a list created by Time magazine to celebrate the world’s most influential people.

Sat next to Meghan on a bench, Harry said at the time: “As we approach this November, it’s vital that we reject hate speech, misinformation and online negativity.

“When the bad outweighs the good, for many, whether we realise it or not, it erodes our ability to have compassion and our ability to put ourself in someone else’s shoes.

“Because when one person buys into negativity online, the effects are felt exponentially. It’s time to not only reflect but act.”

The Duke and Duchess of Sussex stepped down as senior royals in March (Image: EXPRESS)

The Duke added he would not be voting in the election because he was not a US citizen.

But he then added that he had never voted in UK elections either.

Before he stepped down as a senior royal, Harry held the titles: Captain-General of the Royal Marines, Honorary Air Force Commandant of the Royal Air Force Base Honington, and Honorary Commodore-in-Chief of the Royal Naval Commands’ Small Ships and Diving.

His “lifelong commitment” to the military was ultimately over when he chose to move to the US.

Prince Harry and Meghan Markle signed lucrative deals in the US (Image: PA)

Mr Scobie and Ms Durand wrote in Finding Freedom: “Harry’s lifelong commitment to the military was why the Mountbatten Festival of Music three days later was a particularly difficult moment; he was set to wear his Captain-General of the Royal Marines uniform for the very last time.

“‘It was so unnecessary’, Meghan later told a friend of the decision to strip
Harry of his military honours.”