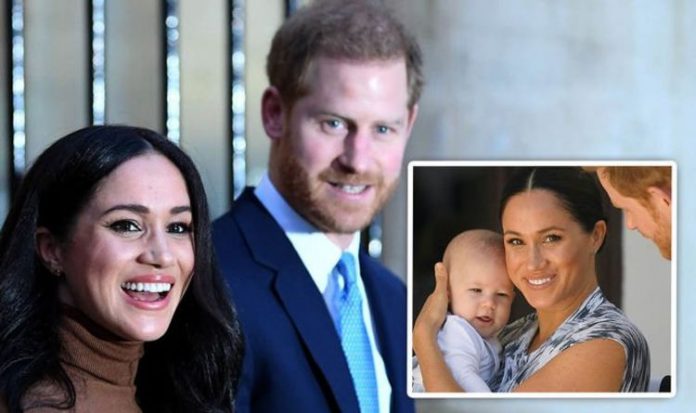 Prince Harry’s life under the scrutiny of the media and the public have pushed the Duke and Duchess of Sussex to take steps to protect their son, royal commentators Omid Scobie and Carolyn Durand have claimed. The authors of Finding Freedom, the unauthorised biography of the Sussexes, detailed how Meghan and Harry have been moving swiftly over the past 15 months to shield Archie from unwanted attention.

The first, most remarkable decision taken in this direction by Meghan and Harry was not to accept the Queen’s offer to five a royal title to Archie upon his birth on May 6 2019, Mr Scobie and Ms Durand said.

They wrote: “Protecting Archie and maintaining his privacy was a top priority for the couple.

“It started when they chose not to give their son a royal title.”

Harry, the experts claimed, had learned from a very young age what being a public figure meant.

Finding Freedom read: “Harry, who learned the dark side of growing up in the royal fish bowl early on in his life by watching his mother relentlessly chased by the paparazzi, and Meghan, quickly getting the same lesson, both wanted to ensure their son chose his own destiny rather than being forced into one by virtue of the family he had been born into.”

Without bearing a royal title, Archie will not be required to carry out royal duties or take part in engagements apart from key gatherings like Trooping the Colour unless he desires to.

Meghan and Harry have successfully protected the privacy of Archie over the past months.

READ MORE: Meghan Markle and Harry ‘tried their best’ as royals ‘turned back’

Mr Scobie and Ms Durand detailed how the Sussexes made sure their son would not be bothered by paparazzi’s lenses during their six-week long retreat to British Columbia over Christmas.

Describing their arrival to Canada in mid-November last year, the book’s authors said: “Though their Canadian home was temporary, Harry and Meghan had done everything they could to make sure it was baby-friendly.

“Sharp corners were proofed with discrete rubber pads and certain items of furniture moved out of harm’s way.

“With the six-month-old now standing and shuffling along the edges of furniture more than crawling, they didn’t want to take any risks.

“They also tried to paparazzi-proof the property.

“Additional fencing had been installed around the perimeter to prevent the long camera lenses they knew would eventually show up from interrupting their daily walks with Archie around the wooden landscape and sandy beachfronts.”

While Finding Freedom explores in details the lives, romance and feuds of Meghan and Harry, the authors claimed they did not collaborate in any way with the Sussexes to write this book.

Appearing on ITV’s Lorraine, Mr Scobie said: “I know there are a lot of rumours and talk about the couple cooperating with the book and us having secret interviews with them, and this was not the case.

Similarly, Meghan and Harry denied any involvement in the book.

A spokesman for the couple said ahead of the publication of the book: “The Duke and Duchess of Sussex were not interviewed and did not contribute to Finding Freedom.