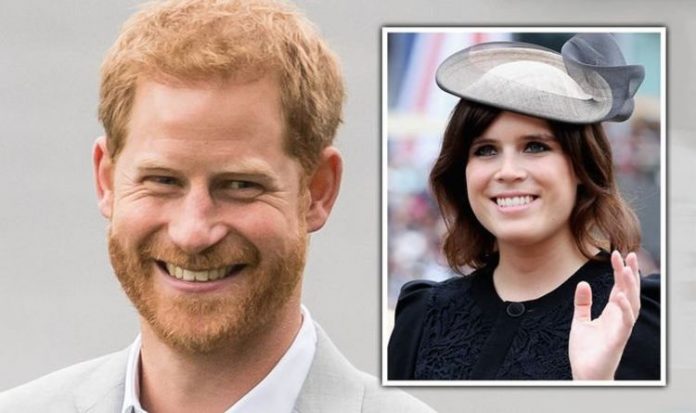 Prince Harry and Princess Eugenie remain “very close” despite the physical distance separating them, a friend has said. They said: “Eugenie and Harry have always been close and they chat privately all the time.”

The bond between the two cousins has been laid bare by the fact that it has been the Duke of Sussex to offer Princess Eugenie and her husband Jack Brooksbank to move into Frogmore Cottage in late 2020, the source added.

They told Hello! magazine: “It was Harry who suggested she and Jack could use Frogmore Cottage because it is much bigger than their cottage at Kensington Palace.

“It is a case of one family member reaching out to another.”

The friendship between Prince Harry and Princess Eugenie has been discussed also by royal authors Omid Scobie and Carolyn Durand in the book Finding Freedom.

Prince Harry and Princess Eugenie are believed to be close friends (Image: GETTY)

Speaking about the bond, the authors wrote: “Eugenie had always been more than just a cousin to Harry.

“They were also the closest of friends. Out of all the Queen’s grandchildren, Harry and Eugenie have one of the most natural connections.

“Like Harry, Eugenie is loyal, honest, and great fun.

“The two had many nights out together in London.”

Eugenie, who announced in September she was expecting her firstborn, was also the one who introduced Harry to one of his girlfriends, Cressida Bonas.

And, according to Mr Scobie and Ms Durand, she has been one of the first to learn about Harry’s relationship with Meghan Markle.

They added: “In fact, Eugenie, who’d long wanted to see her cousin settle down and be happy, told friends she loved Meghan and that she was ‘just the tonic’ for him.”

Prince Harry’s offer to move into Frogmore Cottage while the Sussexes are in California appears to have been taken up by Princess Eugenie and Jack.

In late autumn last year, it was reported the couple had moved into the Windsor home where Meghan and Harry had spent the last few months of the Duchess’ pregnancy and lived with Archie until mid-November 2019.

However, just a few weeks later, the mum-to-be and Jack were said to have moved out of the cottage.

Mr Scobie recently argued Eugenie and Jack may have decided to create a coronavirus bubble with Sarah Ferguson and Prince Andrew and move in with them at the Royal Lodge ahead of Christmas.

He said during the Heirpod podcast: “We saw something in the news a few weeks ago about how Princess Eugenie and Jack Brooksbank had moved into Frogmore Cottage.

“That Harry and Meghan had opened the doors to the home to the couple and then mysteriously there was a report that said they had moved out.

Mr Scobie added: “And I saw information today that the couple have actually been spending their holidays with Sarah Ferguson, ‘Fergie’, and Prince Andrew at their Windsor Lodge home, on the Windsor Estate.

“So I imagine that’s probably where they will remain up until much later in the year.”

However, Hello! states Eugenie has been “nesting” at Frogmore Cottage while she waits to give birth to her first child.

Jack and Eugenie married in October 2018 at St George’s Chapel.

The pair lived the first years of their married life at Ivy Cottage, a three-bedroom home on the grounds of Kensington Palace.