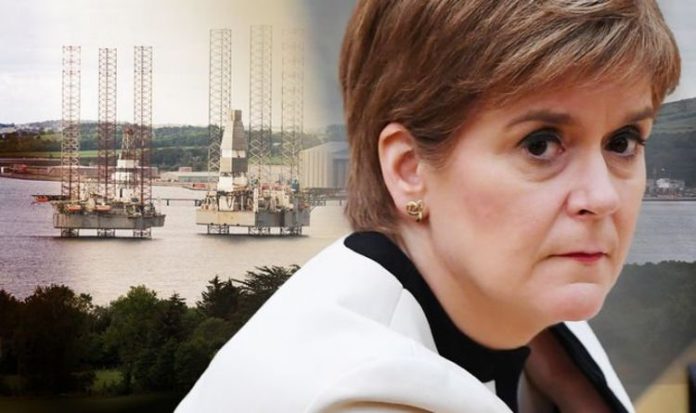 The Scottish National Party (SNP) has gained serous momentum in its efforts to take Scotland out of the UK. Polling in the second half of 2020 consistently put support for independence above 50 percent, with some polls indicating 58 percent would back secession. As a second referendum on independence looks increasingly likely, debate has focused on the economic impacts of Scotland leaving the union. Scottish First Minister Nicola Sturgeon has come under scrutiny for this, and confidence in the SNP hasn’t been aided by promises the party made over oil.

The SNP offered its economic projections in 2013, based on Scottish Government models, which suggested oil prices would be broadly stable for at least two years.

However, the price of crude oil plunged in the second half of 2014, as the independence referendum reached its climax, nearly halving from £86 per barrel in June of that year to £43 in December.

In the same year, Scottish Labour demanded the SNP apologise for the “£30billion black hole” in Ms Sturgeon’s projections.

In 2020, Scotland’s hopes of building an economy partly with the oil industry was dealt another blow amid the coronavirus pandemic.

As prices slump, so has demand. In May 2020 oil demand was down by 21.5 million-barrels-a-day against the level seen in May 2019, according to analysis from the International Energy Agency.

Nick Butler, a professor at King’s College London and member of the International Energy Agency’s commission for urgent action on energy efficiency, wrote for Prospect last June that the oil price fall is “the last nail in the coffin for independence”.

He added: “The collapse in global oil and gas prices has undermined any suggestion that Scotland’s economy can be sustained by the revenues generated from the development of North Sea energy supplies.

“The reality is that the offshore industry is in deep trouble and as a result Scotland is likely to become more rather than less dependent on support from the rest of the UK.”

She said: “Assuming a referendum bill is passed by Parliament, there is then a four-week period where both the UK and Scottish law officers have the opportunity to refer it to the Supreme Court for a ruling of whether it’s within competence or not.

“This happened with the Scottish Continuity Bill, the Government referred the bill to the Supreme Court which meant it couldn’t get royal assent and be enforced.

“It took several months for the Supreme Court to hear the case, and in the meantime the EU Withdrawal Act was passed and that reduced the legislative powers of the Scottish government.

“There is a risk that the Government could refer a referendum bill to the Supreme Court and pass legislation to make clear Holyrood cannot call an independence referendum.

“There is no legal barrier to prevent the Government from attempting to do this. Whether or not it is a justifiable course of action would of course be a matter of dispute. I can imagine a lot of people would regard it as illegitimate.”