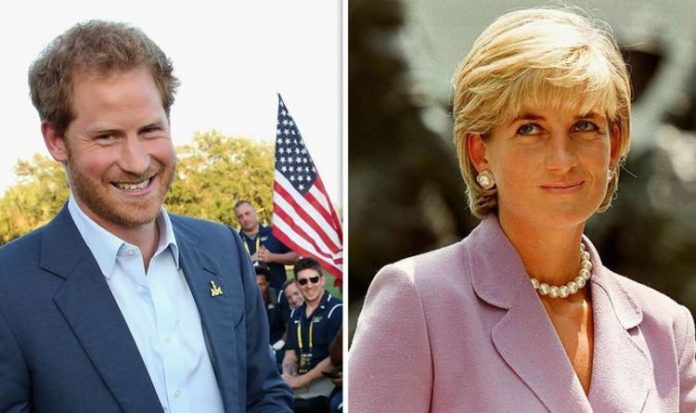 Harry and Meghan initially relocated to Canada after announcing their decision to step down as senior royals earlier this year. They then moved to the US after a few months and are now looking for a permanent home in Meghan’s childhood state of California. When they first decided to leave the Firm, they wanted to divide their time between the UK and North America.

However, after Megxit negotiations with the Queen, the two agreed to spend the majority of their time across the Atlantic — a choice which frustrated many taxpayers who contributed to the £2.4million renovation of the Sussexes’ Windsor home, Frogmore Cottage.

Yet, one royal may have had an inkling Harry was always going to move to another continent.

She explained back in 2017, after the news of Harry and Meghan’s engagement became public, that Diana had suspected her youngest would be linked to the US.

She said: “Diana would be so proud of the man Harry has become and of his relationship with Meghan.

“She loved looking at Harry’s and William’s astrology charts.

“The boys made her happiest in her life.

“I remember meeting Harry one day at Kensington Palace. He was dressed as a policeman and playing with William. Harry was six.

She continued: “She told me how they had been to California and stayed in Goldie Hawn’s house.

“The boys loved it, they were happy there, but Diana found the US too much as they fawned over her all the time.

“I remember her saying, ‘I want the boys to be worldlier and know about life beyond this country’.”

Ms Frank said the late royal considered the US to be “modern and different” and that it soon became one of Harry and William’s “favourite places”.

The astrologer then recalled that Diana had said Harry was “a handful” and that “amused her and she adored him”.

However, at the time of the interview, few expected him to end up living in the US permanently.

As ’s royal correspondent Emily Andrews predicted last year, she expected them to buy a holiday home in Los Angeles so they could be close to Meghan’s mother Doria Ragland.

Ms Frank also claimed Diana would have been proud that “Harry is doing things his own way” when he was already bucking royal trends through his wedding to Meghan.

Royal commentator Krister Meinzer then told Insider magazine last year why a move to the US was definitely likely for the Sussex family.

She said: “It would allow Meghan to be close to her mother and the majority of her friends.

“It would give Archie a grounding in one half of his culture.

“And it would better connect Harry to his wife’s history and his own — let’s not forget that Princess Diana’s great-grandmother, Frances Ellen Work, was an American.”

Diana’s former butler Paul Burrell also told Fox News in October that Diana even considered buying a house on the west coast of America, in Malibu, following her divorce.

He said: “It used to be owned by Blake Edwards and Julie Andrews.

“We had the plans for that house and we dedicated the rooms to William and Harry and the princess.”