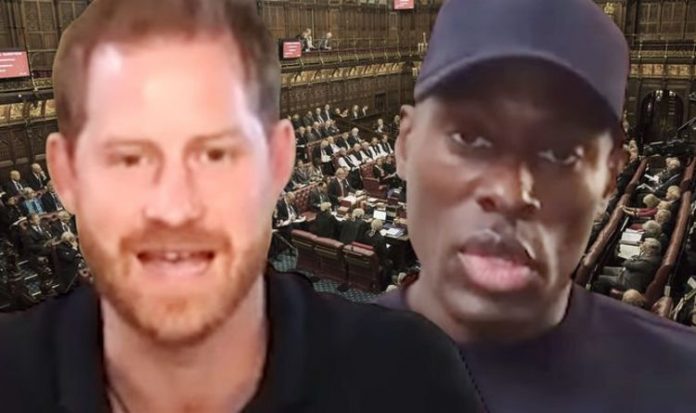 Prince Harry spoke with Black Lives Matter hero Patrick Hutchinson during an interview with GQ. Mr Hutchinson shot to fame following the captured moment where he lifted a white counter-protestor out of harm’s way in a tense standoff. Prince Harry insisted that it was no longer up for debate the positive impact that can follow after the Black Lives Matter protests across the world.

He took aim at politicians attempting to slow down the progress of unity between people in order to eliminate racism in societies.

Prince Harry said: “I think one of the most dangerous things is people within positions of power.

“How are we ever going to get to that point where there is more fairness?

“Because it’s not a zero-sum game, right? Everyone benefits if the black community gets treated the way they should be treated.”

Prince Harry reiterated that fighting racism would be a continuous effort rather than an easy fix.

He said: “Every day is a learning process and it’s not actually up for debate.

“These are the facts, this is what’s happening and it’s been very interesting for me to sit through or live through this in America.”

Prince Harry added he believed it would take an effort from all individuals in all works of life to make significant changes in regards to racism.

He said: “But again, it’s going to take every single one of us to really change things and anyone that’s pushing against it really needs to take a long, hard look at themselves in the mirror.

“Because as I said, this isn’t black versus white, as you quite rightly pointed out, now in 2020 we have protestors of every colour, every background, every religion, every age.

“This is a global movement, the train has left the station and if you’re not on it now, then get on it because there’s so much that we can do.

“And being a dad myself, the whole point in life, I guess, for me, is to try to leave the world in a better place than when you found it.”

Mr Hutchinson agreed and reiterated the importance of thinking about the future.

He said: ” Yeah, definitely and for those that we’re going to leave behind, we want it to be a better place for them.

“That’s got to be our ultimate goal, right?”