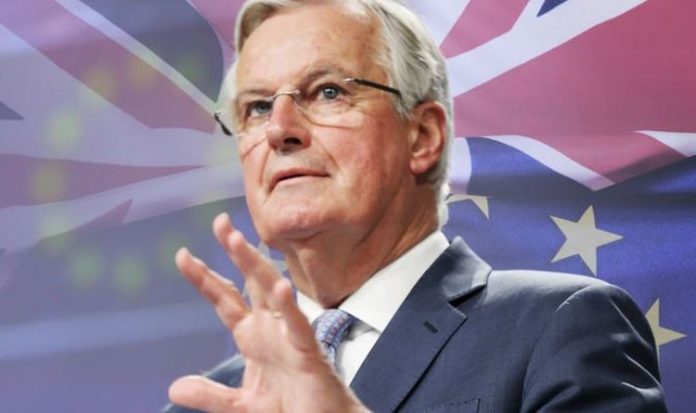 Negotiations have reached breaking point as Prime Minister Boris Johnson and EU negotiator Michel Barnier fail to make progress over a trade deal. Mr Barnier agreed to put everything on the table and “intensify” talks as he looks to secure a deal with the UK. Brussels and London have clashed over red lines on state aid, regulation and fisheries as the end of the transition period approaches, with many fearing a deal may be out of sight.

The EU has demanded continued access to UK fishing grounds despite warnings from Mr Johnson that Britain will take control of its waters.

But a no deal scenario still looks increasingly likely as a compromise still looks out of reach.

While neither side has budged during trade talks, the EU were forced to remove a “punishment clause” during withdrawal talks.

In 2018, Mr Barnier and officials from Brussels removed the clause from a draft text of the arrangement for the Brexit transition period.

Documents relating to the transition period suggested Britain would have faced tough sanctions if it broke the EU rules – despite not being involved in making them during that time.

The European Commission left a footnote in the document that said the UK would lose access to elements of the European single market if it broke the rules during the transition period.

However, Brussels backtracked on this, as the wording was changed to suggest the UK would instead be put through “infringement procedures” instead of sanctions.

The European Commission even apologised for the clause which Mr Barnier had defended as “perfectly normal”.

READ MORE: ‘If I was Britain I’d walk away’ – EU fury at Barnier over Brexit

Other diplomats had expressed their worries about the punishment clause.

One added “there was no appetite” to go back to the stalemate in the talks in the previous year.

“It is up for discussion,” they added. Another branded the clause “unworkable”.

Then-Brexit Secretary David Davis branded the clause “frankly discourteous”, and accused Mr Barnier of wanting to have it “both ways” after Brussels rejected British demands to be given the right to object to any new EU law against its interest during transition.

Whitehall sources said the French were particularly angry at the “aggressive political opening salvo” and described the hardline stance as having “fractured” the 27 EU member states.