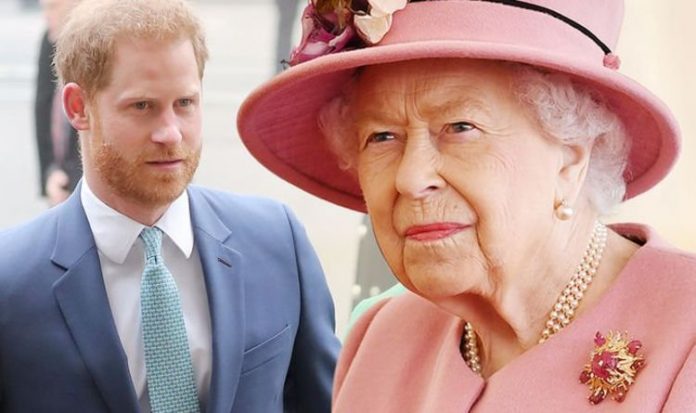 Prince Harry, 36, and Meghan Markle, 39, have not been back to Britain since quitting their royal roles last March. Since their withdrawal from the Firm their couple have settled in Santa Barbara, California with their son Archie Harrison, one, and are expected to be based there long term.

While Meghan and Harry are no longer working royals they are still treasured members of the Windsor Family and were expected to return to Britain this spring for a string of important events.

Prince Philip, 99, is due to mark his 100th birthday on June 10 and Queen Elizabeth II’s official Trooping the Colour birthday parade is expected to go ahead in central London on June 12.

According to a royal expert how the Sussexes interact with the wider Royal Family on this upcoming trip could set the tone for future royal reunions, including the Queen’s Platinum Jubilee next year.

Royal commentator Richard Fitzwilliams claimed that while Meghan and Harry handled their initial stepdown “brutally” they have since found their feet outside the Royal Family.

Mr Fitzwilliams told Express.co.uk: “Prince Harry is sixth in line to the throne.

“We all know that he and Meghan stepped down in January last year from being senior working royals.

“They handled it brutally. They were subsequently unhappy with the Sandringham Agreement with the Queen which resulted from it, but they have since found their feet though activities, as Harry has sadly discovered with this year’s Invictus, are still circumscribed owing to the pandemic.”

According to the royal expert, the Sussexes are expected to attend future royal events as non-working members of the Windsor family.

The expert said: “The emphasis must be on friendliness and amiability between the Royal Family and the Sussexes.

“They all know the media is watching every move.”

“However, as he discovered last November, when the wreath he sent to be laid on his behalf at the Cenotaph on Remembrance Sunday was not accepted, reportedly on the personal orders from the Queen, nothing is automatic.”

While royal fans had hoped to see Meghan, Harry and Archie all return to the UK this spring, the Duke could make the journey solo, insiders have claimed.

Sources close to the Sussexes have suggested Meghan and Archie will remain in the US as Harry travels back to Britain in June.

Rather than a snub, it is understood this decision would be made in response to the practical challenges posed by the COVID-19 pandemic.

A source told the Daily Mail: “It should be strongly stressed that there is still an element of uncertainty about this because of the unpredictable Covid situation, but the understanding is the duke is more than likely to come back on his own.

“This is a personal and practical decision by the couple, but it would certainly help officials navigate what is likely to be a fairly tricky situation.”

There are also fears the huge public interest in Meghan and Harry could dwarf the Queen and Philip’s birthday celebrations if they returned to Britain as a family unit.