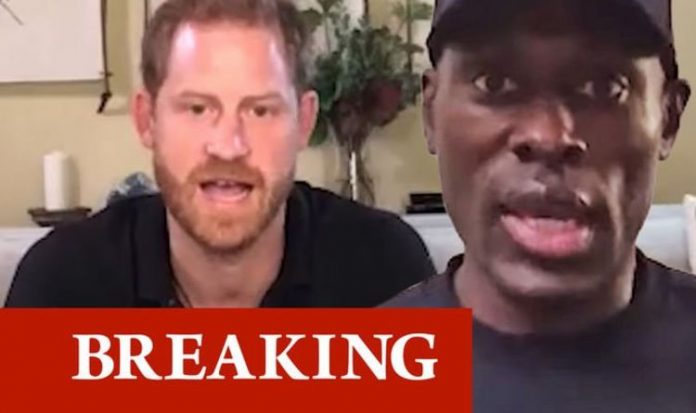 Prince Harry led a 40-minute long chat with Mr Hutchinson, hailed a hero after bringing Bryn Male, a counter-protester in London’s South Bank in June, to safety. The Duke of Sussex briefly introduced Mr Hutchinson before starting to speak about the Black Lives Matter movement, unconscious bias and racism in the UK.

However, he was caught making a small mistake upon speaking about Mr Hutchinson’s personal life.

Prince Harry said: “I’m just going to dive straight in, because everyone around the world, millions if not hundreds of millions of people would have seen that photo of you during the protests in London.

“What people might not know about you is who you are.

“I know you are a dad, I know you have two wonderful daughters, you have grandkids as well.

The interview, recorded for GQ magazine, focused on the heroic act carried out by Mr Hutchinson in June – and what the fame that hit him afterwards has inspired the activist to do.

Mr Hutchison, a personal trainer, was taking part in one of the Black Lives Matter marches in London during the summer when he jumped into a heated encounter between activists and counter-protesters to rescue Mr Male, who appeared to have been injured at his head and unable to leave the dangerous area alone.

During the chat, Prince Harry describes Mr Hutchinson as a “guardian angel” who selflessly acted during the protests.

He said: “That moment when you went to London, what made you go?

“To me, you seem like some sort of guardian angel who was there to protect everybody from that sort of red mist that comes in when you are acting as a group against another group.

“That’s what came across to me. But what was the plan?”

Mr Hutchinson replied his and his friends’ idea was to attend the march as “seniors” able to calm down the youngsters whenever they seemed ready to escalate to violence during the march.