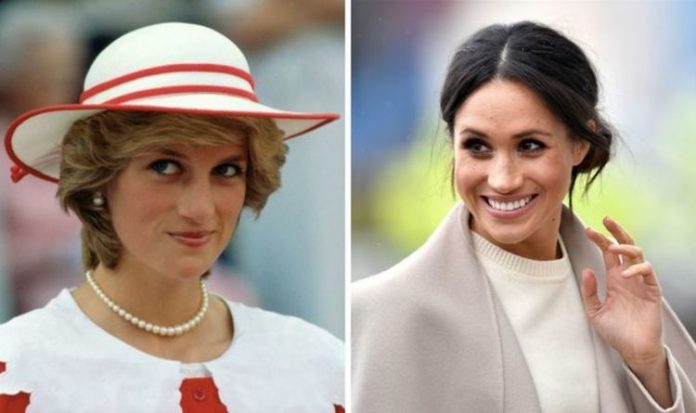 The Duke and Duchess of Sussex started their romance in July 2016. Harry recognised the “quirks and originalities” that made Meghan a “similar character” to Diana, while she also “fought her battles” with the same “anti-royal qualities”, Battle of Brothers by respected royal biographer Robert Lacey claims.

The book says: “Already Harry could sense in Meghan the quirks and originalities that made her such a similar character to Diana.

“She was a changer not a conformist, who fought her battles with the same non-royal – indeed, those temptingly anti-royal – qualities of his mother.”

The new royal book, serialised by the Daily Mail, makes fresh claims about events leading up to the Meghan and Harry’s departure from the Royal Family.

Prince William feared his younger brother was rushing his romance with Meghan, according to Battle of Brothers.

The book says: “For his part, William was worried that his brother was going too fast in his courtship and he didn’t shrink from saying so when Harry started talking about getting hitched.

“’This all seems to be moving rather quickly,’ William was said to have remarked to Harry doubtfully, on the testimony of more than one friend. ‘Are you sure?’

“It went against his every instinct – and his own track record.

“If ‘Waity William’ had taken nearly a decade to test out and approve his life partner, surely his younger brother could ponder his options for just a year or so more?”

Meghan and Harry tied the knot in May 2018, less than two years after they met.

And within another two years, the Sussexes had quit royal duties for a new life in America.

Meghan and Harry are now living in a Californian mansion with their young son Archie.

They announced bombshell plans to step back as senior royals in January.

The Queen held a crisis summit with Prince Charles, William and Harry to discuss the Sussexes’ future roles.

They are launching new careers away from the monarchy which includes a multi-million pound deal with streaming service Netflix.