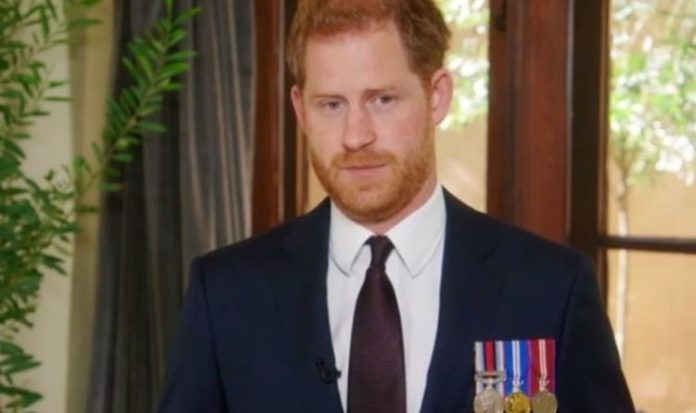 Prince Harry took part in the 14th annual Stand Up for Heroes event on Wednesday night. In a clip recorded for the first virtual fundraiser in the history of this successful event, the Duke of Sussex opened up on duty and service.

Admitting the 10 years he spent in the Army had a profound impact on him, the Duke of Sussex said: “It changed how I viewed sacrifice and service.”

Referring to his position within the Royal Family, the Duke continued: “I was born into a life of duty, but it was during my decade in the Army that I committed to a life of service.”

Prince Harry, who was born second-in-line to the throne, served in the Army for 10 years and completed two tours in Afghanistan.

A year before leaving the military to dedicate himself full-time to the Crown, the Duke of Sussex launched the Invictus Games to help and celebrate wounded and sick veterans and service people.

Speaking about one of his most successful initiatives to date, Harry said: “I wanted to honour the legacy of these men and women who have given up so much ― from time with family to birthdays missed and even births missed.

“It’s for that reason that I created the Invictus Games ― to give injured servicemen and women a platform to excel and reaffirm their values of resilience, of community and strength, which are inherent in each and every one of us.”

Prince Harry added his decade in the Army made a profound and lasting impression on him and his growth.

He added: “My experience in the military made me who I am today – and it also connected me with some of the strongest, funniest and most memorable people I’ve ever met.”

During the virtual event, which honours injured veterans and their families as well as benefitting the Bob Woodruff Foundation, the Duke also spoke about the deep impact coronavirus has had on most people around the globe.

He said: “For the whole world, this year has been and continues to be incredibly hard.

“As far as I see it, service is what happens in the quiet and in the chaos.

“It’s what happens when people aren’t looking and it’s about how we take care of each other every single day.”

Prince Harry’s awareness of his position of ‘spare’ within the Royal Family had an impact on him during his childhood, according to royal biographer Robert Lacey.

Appearing on the podcast Royally Obsessed, the author of Battle of Brothers claimed: “Prince William derived a lot of strength from the idea that he would be king, and have great responsibility.

However, the Duke of Sussex embraced royal duties since his early 20s and dedicated himself to it between full-time 2015 and 2020.

Prince Harry stepped down as senior royal alongside his wife Meghan Markle in March this year.