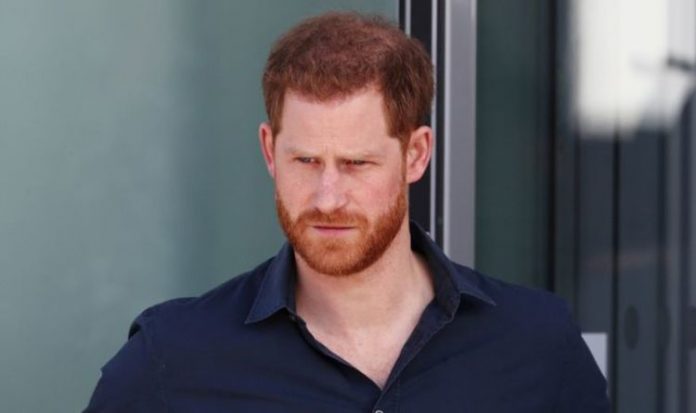 Prince Harry joined yet another video chat, this time to give a speech for Travalyst, his non-profit eco-tourism company. The royal appeared twice: first at midnight in LA time, which is 8am British Standard Time, and then again later. However, as Royally Obsessed podcast hosts Roberta Fiorito and Rachel Bowie discussed, the second time around, the Duke of Sussex was confronted by a “terrifying” earthquake.

Ms Bowie told listeners: “Around the time of the second call was a 4.2-magnitude earthquake which celebs and LA locals were all tweeting about.

“Kelly Clarkson tweeted that she and her children were awake way too early because of the earthquake while Khloe Kardashian said it felt way stronger than 4.2.

“So this must have been terrifying.

“As Prince Harry’s giving his speech, a little bit later there’s an earthquake.”

She continued: “Omid Scobie talked about this. He said the Duke felt it for sure.

“He went to sleep a little bit later and that’s when it occurred.”

Ms Fiorito added: “That’s crazy, there’s so many things to get used to for Harry.

“Earthquakes are a big part of California living.”

The United States Geological Survey showed that the earthquake struck just over a mile north of Pacoima, a neighbourhood in the San Fernando Valley, at about 4.30am local time.

The area shuddered with aftershocks following the quake, which was about five miles deep.

A Los Angeles Police Department spokesperson said there were no immediate reports of damage.

Each year, California generally gets two or three earthquakes large enough to cause moderate damage to structures (5.5-magnitude and higher).