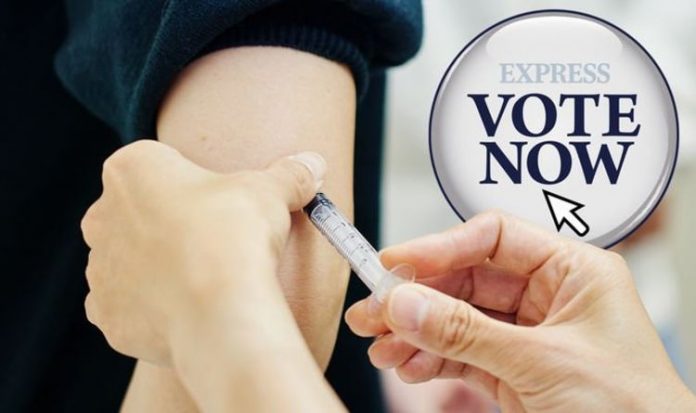 According to a new study by King’s College London and Ipsos MORI, only 53 percent of the UK population said they are ‘very likely’ to get the vital coronavirus vaccine.

However, the study – which asked 2,237 people aged between 16 and 75 – found a huge number of people will refuse the jab, if it becomes available.

This is due to beliefs, attitudes and values rather than concerns over the pandemic.

Following the shocking results, the Express.co.uk is asking, ‘Should Brits be forced to have the jab once developed?’

Should Brits be forced to get COVID vaccine? (Image: Getty)

Scientists are working to find a vaccine for COVID (Image: Getty)

On top of the 53 percent, that are ‘very likely’ to get the jab, the study found just one in five (20 percent) will be ‘likely’ to have the coronavirus vaccine – if one is developed.

One is six (16 percent) admitted they are ‘unlikely’ to or ‘definitely will not’ have the vaccine.

The study found that more than a third (37 percent) believe face masks are bad for people’s health.

Around 34 percent claim face masks do not reduce the spread of the virus.

Face masks are mandatory on all public transport (Image: PA)

And the same number claimed the government only wants people to wear masks as a way to control the public.

Professor Bobby Duffy, director of the Policy Institute at King’s College London, said: “Misperceptions about vaccines are among our most directly damaging beliefs, and they’re clearly influencing people’s intentions during the coronavirus crisis.

“While one in six in the UK say they are unlikely to, or definitely won’t, get a potential vaccine against COVID-19, this rises to around a third or more among certain groups, with a clear link to belief in conspiracy theories and mistrust of governments, authority and science.

“Vaccines are one of our greatest achievements, and there is a great deal of faith that we’ll eventually develop one for COVID-19 but more still need to be convinced of how important it could be for ending this crisis.”

The results also found around 36 percent of people ‘strongly agree’ too much fuss is being made about the pandemic.

Around 27 percent said they do not find the deadly virus stressful while 24 percent are not worried about lifting lockdown restrictions.

Huge progress has been made in the development of a vaccine so far, although experts have warned there are no guarantees a successful jab will be developed.

The UK has the highest death toll across Europe after surpassing 46,000 and many have criticised the government’s handling of the pandemic.

Despite fears of a second spike, Prime Minister Boris Johnson has moved forward with plans to ease lockdown restrictions.

Restaurants, bars, cinemas and cafes have all reopened with schools expected to reopen in September.

However, some local regions have faced a second lockdown after new cases began to rise.

Today, Sir David King, a former scientific adviser to the government, warned a second national lockdown may have to be imposed next month.

Sir David warned another UK wide shutdown could be needed in September unless the Government sorts out its ‘Test and Trace’ policy this month.

He said the reopening of schools is likely to boost the R rate, the number of people each COVID-19 patient infects, by 0.5.