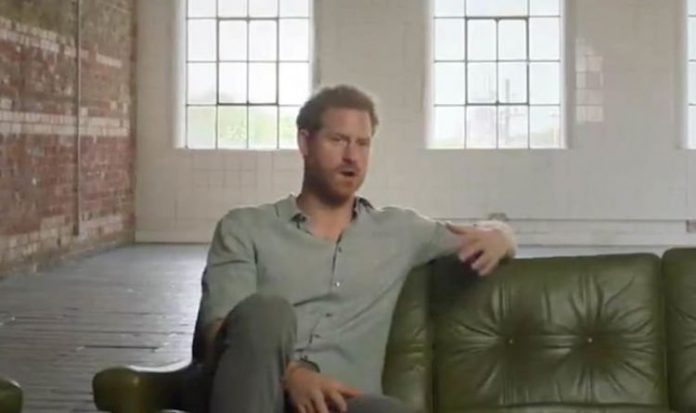 Prince Harry has proudly taken part in a Netflix documentary focused on a topic very close to his heart: Paralympians. The Duke of Sussex has been included in a short trailer for the upcoming film, titled Rising Phoenix, which has been shared on social media by the streaming service.

The clip shows Harry being interviewed in an empty room as he sits on a green couch.

On his first appearance in the clip, Harry said: “There isn’t anything else in the world that can bring you back from the darkest places than sport.”

In a second shot, the Duke speaks about the wide impact sports have not only on athletes but also on their loved ones and those watching the games unfold.

He added: “Yes, lives have been changed on the track, but lives are also being changed in the stands.”

The Duke of Sussex is “proud” to be debuting on the popular streaming platform with this film, according to his spokesman.

He said: “The Duke is proud to have been one of the people contributed to this film, which is a unique and powerful documentary that hopes to change the way people view disability — and tell the incredible story of the Paralympics.”

Rising Phoenix features Paralympians from across the world and was due to be released in tandem with the 2020 Tokyo Olympic and Paralympic Games.

READ MORE: Royal POLL: Are you worried about the collapse of the Royal Family?

While the games have been pushed back until 2021 due to the coronavirus pandemic, the film will still be released this year, on August 26.

The Tokyo 2020 organising committee said: “Featuring Paralympians from across the world, Rising Phoenix tells the extraordinary story of the Paralympic Games.

“From the rubble of World War II to the third biggest sporting event on the planet, along the way sparking a global movement which continues to change the way the world thinks about disability, diversity and human potential.”

Prince Harry has repeatedly shown he believes in the healing power of sports over the past six years.

The Duke of Sussex is the founder of the Invictus Games, an international adaptive multi-sport event which first took place in London in 2014.

The 2020 edition was due to take place in May at The Hague – but just like the Games in Tokyo it had to be postponed to 2021.

Harry himself announced the sad news in a video filmed at producer Tyler Perry’s home in California, where he, his son Archie and wife Meghan Markle lived between late March to early July.

In his brief speech, the Duke said: “I’m so grateful for everybody who has worked so incredibly hard over the last couple of weeks to try and find any alternative to try and carry out these games, in a different way and in a safe way.

“But this decision was the most sensible and the safest option for all of you and your families as well as everybody else involved in these games.

“I know how disappointed you all must be.

“This is a focus that so many of you need.”

Harry’s debut on a streaming channel comes four months after Meghan was featured in a Disney+ documentary, Elephant.

The Duchess of Sussex recorded the narration for a Disney documentary focused on elephants and their migration across the Kalahari last autumn, just before heading to Canada for a six-week break.

Rumours Prince Harry and Meghan may appear on Netflix started to circulate just a few days after they shared their intention to step back as full-time working royals in January.

When the streaming platform’s chief content officer, Ted Sarandos, was asked whether he would court Harry and Meghan to appear on Netflix, he gave a telling answer, according to the Daily Mail.