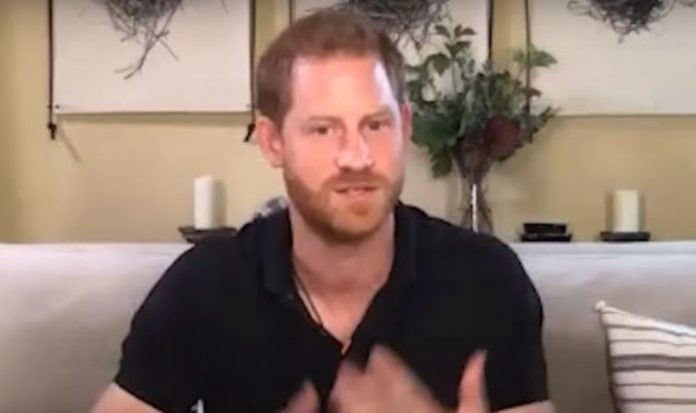 Prince Harry’s latest conversation with Black Lives Matter activist Patrick Hutchinson has divided royal fans. While some have argued the Duke of Sussex is attempting to shed light on complex race issues, others have argued he isn’t causing any real change. While on the Jeremy Vine show with Anne Diamond, commentator Dawn Neesom also argued it spoke volumes about Prince Harry’s character and privilege growing up that he did not know what unconscious bias was.

She argued that if he really wanted to make improvements to the black community, he would be better suited to doing it in the UK rather than from his US mansion.

Anne Diamond said: “He can’t help being a bit upper-class. He is the Royal Family.”

Ms Neesom replied: “BLM hero Patrick Hutchinson really puts his money where his mouth is to save that white lad when the BLM marches were going on by carrying him over his shoulder.

“Now, if Harry wants to make a difference to the black community in this country, he needs to get back over here, work on the ground and set an example to young, black lads who are genuinely suffering not lecture from a million-pound mansion.”

DON’T MISS: Prince Harry warned he is becoming ‘too preachy’ with video rants

She said: “They are doing some good in the world, come on!

“Let’s not just bash Harry and Meghan. They are doing some good!”

Despite Prince Harry’s best intentions to raise the profile of certain issues, the Duke has faced criticism for becoming “too preachy” after leaving the Royal Family.

While speaking on Sky News on Monday, royal commentator Rhiannon Mills said Harry has reinvigorated the debate over how he and Meghan Markle should behave outside of the Royal Family.

Ms Mills said: “Prince Harry would rather we be focussing on everything that Patrick continues to do and did over summer.

“However, the debate will reopen about whether Harry is getting the tone right when it comes to talking about these issues on diversity.

“Of course Meghan has talked very openly about the challenges she has faced as a mixed-race woman growing up.

“Some people have suggested that Prince Harry is coming across as being too preachy when it comes to this issue.”

Harry did address the criticism he faces during his conversation on GQ however.

He admitted that he would not always get his tone or language right but would continue regardless to champion issues he cared about.

Ms Mills said: “Harry talks about how it is sometimes difficult for people to get the language right.

“He said people are going to make mistakes and it will be noticed.

“Interestingly he goes on to say that this is a global movement and the train has left the station.

“If you are not on board now, then get on it because there is so much that we can do.”