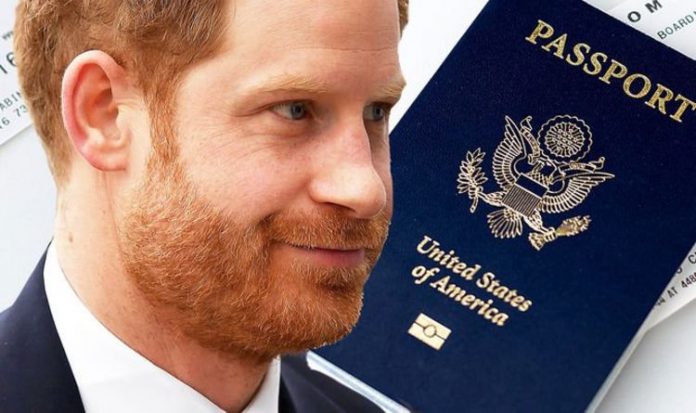 Prince Harry and wife Meghan Markle earlier this year announced their intention to renounce their senior working role within the Royal Family to pursue a more independent career in the public sphere while maintaining more control over their private lives. The Queen granted the Duke and Duchess of Sussex permission to maintain their HRH styles but ordered the couple not to use their title and styles when conducting business. Some members of the public have demanded Her Majesty strip the couple of the ducal title, but expert Marlene Koenig pointed out Prince Harry may automatically no longer be known as the Duke of Sussex if he chose to apply for US citizenship.

Speaking to Express.co.uk, Ms Koenig said: “He would literally have to, even though there is no law preventing him from still being called Prince Harry, but when you become a US citizen, you have to renounce any titles or allegiance.

US Constitution Article 1 clause 8 states: “No title of nobility shall be granted by the United States: and no person holding any office of profit or trust under them, shall, without the consent of the Congress, accept of any present, emolument, office, or title, of any kind whatever, from any king, prince, or foreign state.”

Should the Duke of Sussex proceed with a request for US citizenship, he would also face the additional burden of having to pay tax in the United States.

With the commitment Prince Harry has shown to the Royal Family and his grandmother the Queen, he is unlikely to willingly give up his titles but Ms Koenig suggested he could follow a royal precedent established in the early 20th century by one of Queen Victoria’s granddaughter.

The royal expert noted Princess Patricia of Connaught, daughter to Prince Arthur of the United Kingdom, opted to relinquish her titles when she married naval commander Alexander Ramsay in 1919.

“She, being very shy and not having a public role, decided that, because her husband was a mere Honourable, and there was no discussion of him in 1919 getting his own peerage, she chose to be styled not as a princess. She relinquished, did not renounce.”

Ms Koenig added: “So George V, her cousin, issued a letters patent that stated that she was relinquishing the use of the Royal Highness style and the title of princess.

“She would be styled as The Lady Patricia Ramsay with precedence before the marchionesses of England. She didn’t stop being a princess, in fact, in the 1937 and 1953 coronations, she wore the coronet in the role of a princess. She just wasn’t styled.

“So there is an opportunity that Harry could do a Princess Patricia and choose to be styled as the younger son of a Duke, because he is. His father is the Duke of Cornwall and the Duke of Rothesay.”