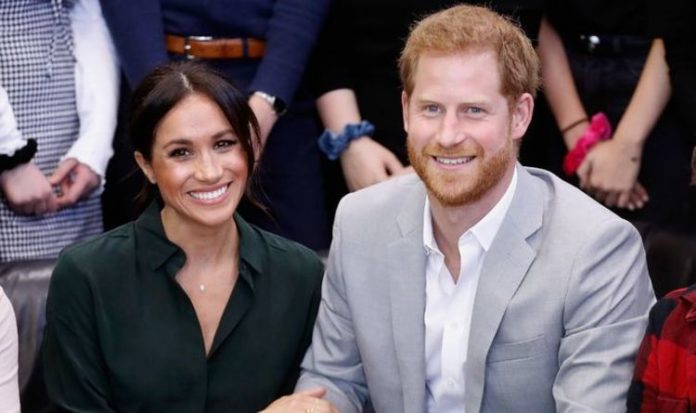 Prince Harry and Meghan Markle released a statement after Buckingham Palace announced they would not be returning to their roles as working royals. Royal expert Robert Jobson told The Royal Beat: “The rudeness of the statement they issued after they left! Frankly, they have been given a lot of slack, but they were damn right rude to The Queen and the Royal Family.” It comes as the Duke and Duchess of Sussex have already sat down with the US TV legend to record the interview, which is due to air on March 7 on CBS. Despite claims in the build-up that “nothing was off-limits”.
Royal expert, Dickie Arbiter has insisted Meghan Markle and Prince Harry will steer clear of directly criticising fellow Royals. Instead, the former Palace press secretary expects the couple to discuss the reason behind the role of the British press in their exit from royal duties and Meghan’s pregnancy.

Mr Arbiter told The Royal Beat: “They are not going to rubbish the Royal Family, because it is not in their interest.

“So they will talk about the ‘suits’, how the officials didn’t back them up.

“They will certainly talk about what they are aiming to achieve; they will talk about family life, babies, and motherhood.

“They will talk about the British media because that sticks in the craw as fair as they are concerned.”

Ms Winfrey is said to have spent two days with the Sussexes filming the interview.

The primetime show is scheduled to air on CBS on March 7 at 8pm for the east coast of America.

For those in the UK, the programme will be live at 1am on March 8.

“They are utterly aghast.”

During their Oprah interview, Meghan and Harry are not expected to talk negatively about the Cambridges.

Another source told Us Weekly: “They won’t talk negatively about Prince William and Duchess Kate.

“They don’t want to put any more fuel on that fire.”