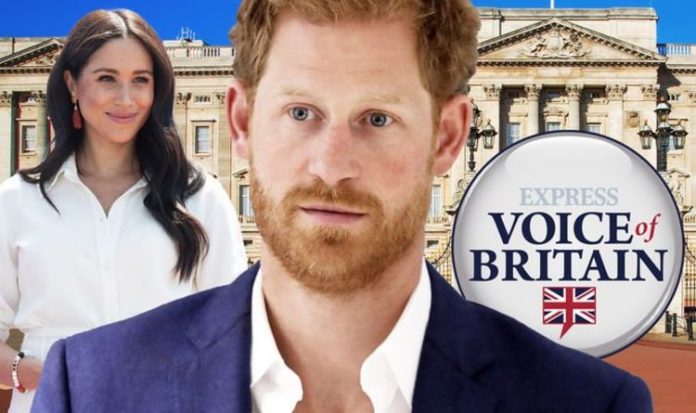 Prince Harry and Meghan Markle announced their plans to step down as senior members of the Royal Family in January 2020, and to mark the Megxit anniversary Express.co.uk conducted a poll on how the couple are perceived by its readers. The poll, which comprised five questions, found Britons believed Harry would one day return to the UK and his family – but only without Meghan.

The Duke and Duchess of Sussex moved to Santa Barbara, California, in July last year, just months after officially cutting their ties with the Royal Family.

Their last official royal engagements took place in February and March 2020, before they stood down on March 31.

As the couple set new roots over 5,000 miles away from Buckingham Palace, Express.co.uk asked its readers if they thought the couple would ever return to the UK and Harry’s relatives.

The poll asked: “Do you think Harry and Meghan will one day want to return to the Royal Family?”

Prince Harry will one day return to the Royal Family, without Meghan by his side – a poll has found (Image: Getty)

Readers then took to the comments to explain why they thought Harry would return on his own but several stated they should stay where they are.

Meghan Markle and Prince Harry married in May 2018 (Image: Getty)

One person said: “I think Harry wants to return, she would return, if she’s was made Queen, it’s all about power with her!”

A second user wrote: “Harry and Megan cannot ever return to the family, ever, it’s over and done with and people really could not care less.”

A third said: “I really think the family is better off without them.”

Several readers thought Harry and Meghan’s relationship was doomed, and will soon result in divorce.

Meghan Markle and Prince Harry carried out their final engagements in February and March 2020 (Image: Getty)

In that event, they thought the Duke would want to return to the UK and the Royal Family.

One person said: “I can’t see their marriage lasting and Harry would then, most likely, return to the Royal fold, he would be wise to protect his boats from fire until the day he needs them.”

A second person wrote: “Harry will want to return when Megan divorces him.”

Another reader said: “Family better without them around. Think m will return only if beneficial to her/them, because even if they get ‘booos’ they are in the news, and allows them to play the victim/ar cards.

“Now H, if a breakup occurs he will return to Britain but not to active Royalty, as by then he would’ve burned all bridges twice over.”

Meghan Markle and Prince Harry wed in a lavish ceremony in St George’s Chapel at Windsor Castle on May 19, 2018.

The couple tied the knot after dating for less than two years.

The Express.co.uk poll was carried out from January 15-20 and saw 25,974 people respond. 193 people decided not to vote on the question discussed in this article.