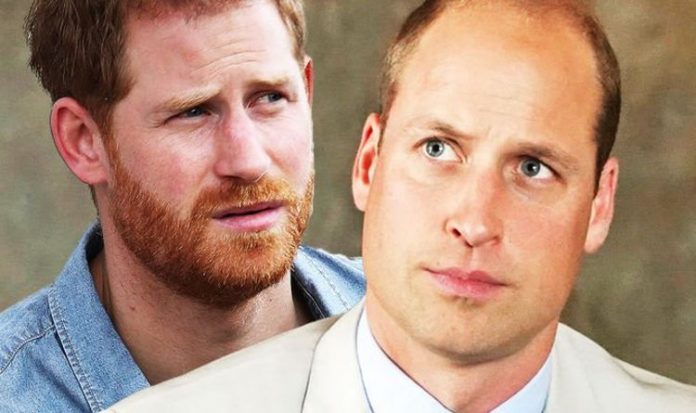 Harry and William have endured a difficult relationship recently, culminating in the Duke of Sussex – alongside his wife Meghan Markle – taking a step back from senior Royal Family duties. On Monday, August 31, the pair would normally join together to mark the tragic passing of Princess Diana, who raised their sons with ex-husband Prince Charles until her death in 1997. This year will see the two princes, both unified in the tragedy and grief the loss of a parent brings, take time to remember Diana, whose death sparked an international outpouring of emotion, separately.

However, there was a time when Harry and William were anchors of support for each other, particularly the Duke of Sussex who struggled following the announcement he had moved away from his career in the British Army.

His struggles coping with his new life away from the Army and back within the Royal Family have been revealed in the new biography ‘Finding Freedom’, by journalists Carolyn Durrand and Omid Scobie.

The difficulties Harry endured, the authors claim, could potentially be seen during his time in the Army, including one devastating moment where he was left “broken” after being forced away from his comrades and out of the Middle Eastern war-zone of Afghanistan, when his position was compromised following a leak from the Australian press.

Amid his time spent with the Army, the torture Harry felt was similar to that of other servicemen and servicewomen, including one operation during his first tour of Afghanistan.

While he was serving as a joint terminal attack controller on the ground and was responsible for directing support planes amid the need to evacuate the Afghanistan National Army (ANA).

The ANA had come under attack by Taliban forces, and as a result of the incident “heavy casualties” were suffered.

Following his “tough decision” to end ten years of service within the British Army, the strains of civilian life ultimately began to take its toll on Harry, who saw “anger and anxiety start to bubble to the surface” of his character.

Harry reportedly began suffering panic attacks while at royal engagements, as the “people, cameras, attention, got to him…he was on edge”.

JUST IN: Meghan and Harry’s new house could ‘put royal brand at risk’

To combat these feelings, Harry began boxing, yet this “wasn’t a sufficient bandage for the internal conflict raging inside him”.

The book added: “Harry was, as he put it, ‘very close to total breakdown on numerous occasions when all sorts of grief and lies and misconceptions are coming to you from every angle’.

“While his experiences on the front lines contributed to his emotional state, it wasn’t the complete answer to his issues.

“And the worst part was he didn’t know what exactly was happening.

But in those most testing of moments, Prince William remained Harry’s rock, “bound not only by blood but also by the unique tragedy of losing their mother”.

Harry explained in 2005, that “every year we get closer” when reflecting on his then-growing relationship with William, describing him as “the one person on this earth who I can actually really…we can talk about anything”.

This developing bond was demonstrated in numerous forms, such as when the princes rented a cottage together in 2009 while both training at a Shropshire flight school, and while setting up their former charitable endeavour the Royal Foundation.

Another occasion saw both princes get “totally drunk” on a night out before Harry experienced his own issues with the public who spotted him.

The Duke of Sussex reportedly “fell into a bush” before his protection officer “jumped to block” an onlooker from taking a photograph of the intoxicated prince.

Unaware, Harry simply returned to “carry on drinking with William”.

The book explained: “Each brother wanted real happiness for the other.

“It was precisely because of this that William confronted his brother about his mental health.

“As Harry later recounted in a podcast interview with the columnist and friend Bryony Gordon, who herself has obsessive-compulsive disorder, he said, ‘You really need to deal with this. It is not normal to think that nothing has affected you.'”

Ever since Diana passed, the two siblings would meet to discuss her memory and how best to preserve the legacy of the woman dubbed the “People’s Princess”.

Angela Levin, author of ‘Harry: Conversations with the Prince’, explained in her 2018 book how it was the desire to remember their mother that saw the brothers grow closer.

She said: “The physical warmth they originally learnt from their mother had not only become part of their brotherly relationship but was also steering them to a much more emotionally led approach to life.”

Yet still claims appear to dissect the Dukes’ relationship, with Ms Durrand and Mr Scobie alleging the falling out came after William referred to Meghan as “this girl”.